Reflections from underneath the Christmas tree (Advent Calendar: Ornaments)

One of my earliest memories is the view of the beautiful lights on the Christmas tree overhead as I rested on the floor near the manger scene. I loved to watch all the ornaments go by on our spinning Christmas tree (thanks to a revolving tree stand that our family has had ever since I can remember).

Our tree always had such a nice menagerie of ornaments - angels, bells, little elves, balls, silver tinsel (I fondly remember the messy kind, although I've never introduced my own children to it).

There are so many types of beautiful Christmas trees, but my favorites are always the ones that have a truly unique character. I love to visit Christmas stores on my vacations, no matter the month. This year I had a festive time picking out nativity ornaments in the Christmas shop in Santa Fe, New Mexico in mid-summer. Several years ago in early fall I wandered through the Christmas store in Rockefeller Center to find a special ornament memento of our visit there. Ornaments from Basel, London, New Delhi and other places family members have visited grace the branches of our tree. Thanks to their presence, Christmas is filled with memories of places we've been and also places we would like to visit someday.

I have always admired the beautiful felt embroidered ornaments from Hungary on my grandmother's Christmas tree. These colorful ornaments, called Matyós after the Hungarian people of Slovak origin who began using this style of embroidery on folk costumes, are now well-known throughout Hungary and around the world. Even though these styles of embroidery only became popular during the late 19th century, they have come to represent Hungary today and make their home on many a Christmas tree in the old world and the new. For more on Matyó rose embroidery (including some interesting books for the serious Matyó collector) see this Kisjankó Bori Memorial House webpage. 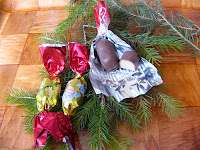 I understand that in Hungary it would not be right for a Hungarian Christmas tree to be decorated without including szaloncukor - traditional candies wrapped in tissue paper with fringed ends (although foil is now often used). The name, according to Anikó Gergely's Culinaria Hungary, means "drawing-room sugar". Supposedly it is permissible to eat the candy as long as the wrapper is left to beautify the tree. Gergely writes that "the ability to remove the tempting confectionary from its wrapper without leaving any sign of tampering or damaging the aluminum foil is a skill acquired at an early age by this nation of candy-lovers and perfected until late on in life".

Licitar hearts (Licitarska Srca) and other Licitar shapes are now the most traditionally Croatian ornaments, although they may also be given throughout the year to loved ones. The hearts, edible although usually not eaten, are honey cakes decorated with icing. The mirror in the center of the heart represents the loved one who received the little gift of love. The origin of Licitar dates back to the 16th century in the Pannonian region of Croatia. The area around Zagreb in northwestern Croatia is most well-known for these decorative confections, although the tradition has spread all throughout Croatia. A beautiful description of the history and tradition behind the Licitar hearts of Croatia can be found in this Croatia Airlines article online.

The Christmas tree has truly become an international phenomenon. What a wonderful way to get a taste of our heritage: by decorating a tree with some beautiful ornaments from the countries in which our ancestors spent so many Christmases.

Think I'll go take a rest under my tree now...

This article is part of a series written in celebration of the Advent and Christmas seasons. It will be included as part of the GeneaBloggers Advent Calendar of Christmas Memories 2009 Day 3: Christmas Tree Ornaments. Make a visit to Thomas MacEntee's GeneaBloggers website for some additional inspiration to get yourself in the holiday spirit!