Not the partridge, but the falcon: a little Hungarian Christmas history

On this Christmas Eve 100 Years in America wishes you Boldog Karácsonyt! The Hungarian word for Christmas, Karácsony, has an interesting origin. According to Charles Dombi, webmaster of Hunmagyar.org, the story goes like this:

"The origin and meaning of the Hungarian word for Christmas, Karácsony, has its roots in ancient pre-Christian (pagan) culture and religious beliefs. It is associated with the most important celebration of pagan peoples, that of the winter solstice. It was an ancient Hungarian custom to celebrate the event with the releasing of falcons which were called 'kerecsen solyom' - 'solyom' means falcon, and 'kerecsen' refers to the type of falcon. Since ancient times, birds of prey have had special symbolic significance, and in the ancient Near Eastern civilizations, the falcon was associated with the sun or the sun-god. This tradition has been preserved by the ancient Magyars (Hungarians) and their ethno-linguistic relatives. The Hungarian word for Christmas, 'Karácsony' is therefore derived from the word 'kerecsen'." 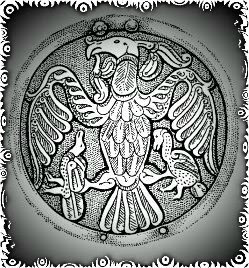 For more on the origin of the word for Christmas in the Hungarian language, see the Hungarian article on the web entitled Karácsony szavunk eredetéről és jelentéséről.

Here's wishing you all a Boldog Karácsonyt, a very Merry Christmas!
Written by Lisa / Smallest Leaf