Wheat on the table, straw on the floor (Advent Calendar: Outdoor Decorations)

During this time of year when so many are working on decorating the great outdoors for Christmas, I can't help but think of how many of our beautiful Christmas traditions began by bringing the outdoors in.

The Christmas tree is the biggest example. Nothing can compare to the sweet smell of pine in your living room during the holidays. But even our artificial trees bring a little bit of the natural world to us. And garlands - with berries, fruit, pinecones and so many other reminders of the great outdoors gracing the inside of our homes. 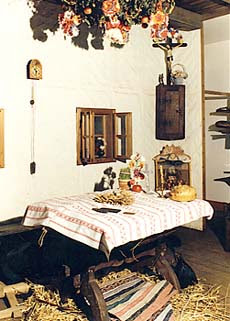 I like the tradition of the Croatian people who hang a kinc made of small pine branches and other decorations on the ceiling during the holidays. What a wonderful place to put a seasonal decoration in a small home. Other items that Croatians traditionally use to "bring the outdoors in" are corn, apples, ivy, holly, and other small tree branches.

The favorite of the small children has to be the large pile of straw placed on the floor on Badnjak (Christmas Eve) in memory of the Holy Infant's birth. Traditionally, most of the straw is placed under the table, but sometimes the table is decorated with it. In some families, it was traditional to sit upon the straw after dinner until it was time to go to Christmas Eve Mass. In some parts of Croatia, children were even known to sleep on straw the night of Christmas Eve. Talk about blurring the lines between the indoors and out!

The Ethnographic Museum of Zagreb has a few nice photos of Croatian Christmas decorations and customs, including the kinc and a table with straw decorating the floor beneath it pictured above.

Probably my favorite Croatian Christmas tradition is the small pot of wheat planted on St. Lucy's Day, December 13. A symbol of life and fertility, the wheat grows in a container that graces the table. Once it grows to a nice height, it is trimmed and decorated with the Croatian trobojnica: red, white and blue ribbon.

Tree branches, ivy, holly, fruit, piles of straw, little pots of wheat - what an aroma of the outdoors begins to scent the Croatian home at Christmastime!

You can learn more about Croatian Christmas traditions at Adriatica.net and Andrea Janekovic's article on Christmas in Croatia.

This article is part of a series written in celebration of the Advent and Christmas seasons. It will be included as part of the GeneaBloggers Advent Calendar of Christmas Memories 2009 Day 5: Outdoor Decorations. (Apologies to Thomas MacEntee for taking liberties with the outdoor decorations theme for today and discussing indoor decorations with an outdoor flavor.) Make a visit to Thomas's GeneaBloggers website for some additional inspiration to get yourself in the holiday spirit!