The patron saint of my Hungarian family tree: St. Elisabeth of Hungary 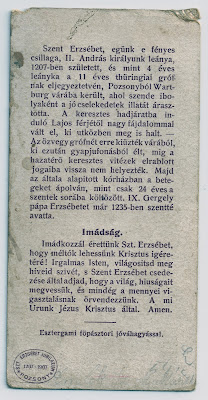 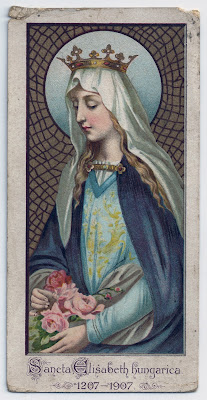 A holy card printed in 1907 for the 700th anniversary
of the birth of St. Elisabeth of Hungary.
(Thanks to my daughter who gave me this treasure after finding
it in a village flea market during her recent trip to Italy.)


St. Elisabeth of Hungary (Szent Erzsébet in Hungarian; Heilige Elisabeth in German) lived a short life (only to the age of 24), but she made such an impact that she was canonized by the Catholic Church only four years after her death. She was born over 800 years ago, but we know much about her family tree back to her great-great-grandparents' generation, and her incredible personal legacy of faith continues to this day. Today, November 17, is her feast day.

Born in the year 1207, at a very young age Elisabeth, daughter of King András II of Hungary, was betrothed to Ludwig IV of Thuringia and taken to live within the Thuringian court. The two became close childhood friends and enjoyed a short and happy marriage until Ludwig died of the plague, leaving Elisabeth a widow at the age of twenty with several young children.

Stories of her generosity to the poor and the miracles that accompanied her work are plentiful. She is best known for the legendary "miracle of the roses".  According to Holy Rulers and Blessed Princesses: Dynastic Cults in Medieval Central Europe

by Gábor Klaniczay (published in English in 2002), the story "in which a disapproving father attempts to expose Elisabeth, who is secretly stealing alms for the poor in her apron, and finds her pious lie turn the contents of her apron into roses" first appears in written form at the end of the 13th century. Elisabeth is commonly depicted holding these miraculous roses. This is the reason (along with the fact that she was a princess) that many little girls (including my own) have chosen to dress as St. Elisabeth of Hungary on All Saints Day!

I was thrilled to see that much detail is known about Elisabeth's royal family tree. Here's hoping that someday I can find a family connection to her ancestral line.

Elisabeth's Hungarian heritage and the fact that my name derives from Elisabeth endear her to me, yet there is another reason that I've chosen her as patron saint of my continued efforts to uncover the roots of my Hungarian family tree. Like my great-grandmother Helen Ulaky, St. Elisabeth was a lay Franciscan associated with the Third Order of St. Francis of Assisi. In fact, just before his death in 1226 St. Francis, aware of her assistance to the poor thanks to Franciscan friars in Thuringia, sent a personal message of blessing to St. Elisabeth. 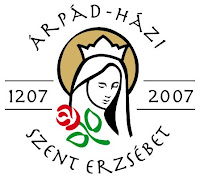 The beautiful holy card pictured at the beginning of this article was printed in 1907 in celebration of Elisabeth's 700th birthday. The year 2007 (the 800th anniversary of her birth) also saw a renewed focus on the history of and devotion to St. Elisabeth of Hungary with celebrations throughout Hungary, Germany, Austria and also worldwide through the Third Order of St. Francis. The town of Marburg, Germany was a special focus of the year since it was the place of Elisabeth's death and its Elisabethkirche was the location of her shrine and relics until 1539. The church was a place of pilgrimage for many Europeans during the medieval period. Today her relics are located in various churches throughout Austria, Germany and France.