She was the youngest daughter of Frank and Helen Ujlaky. A beautiful baby girl, she was baptized Etelka on March 21, 1920 at the age of one month. A first generation American born of parents who had emigrated from Hungary, she came to be known as Ethel. Two years later Ethel's younger brother Kasmir was born into the family: the last of the six Ujlaky siblings. 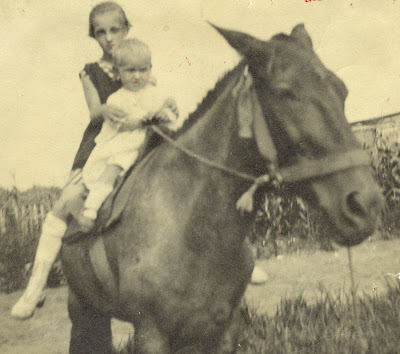 Ethel Ujlaky (age one) with her sister Mitzi
riding Buster the horse.
Staten Island, circa 1921. 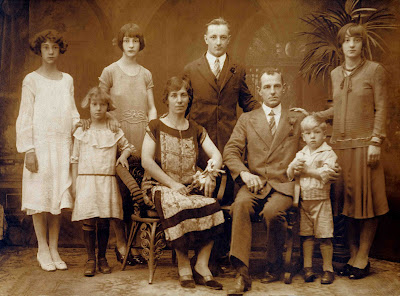 The Ujlaky family of South Beach,
Staten Island, New York, circa 1926.
Ethel is the young girl standing
at left of her mother (seated).
Born between their two brothers in this closeknit family, the four sisters, who entered the family within the span of a decade, developed a special sisterly bond that grew throughout the years.

Here they are together in 1936 outside the family's South Beach, Staten Island home. Ethel, third from the left, is sixteen years old. Her sisters, all in their twenties, were making their way into adulthood, getting married and having children of their own. 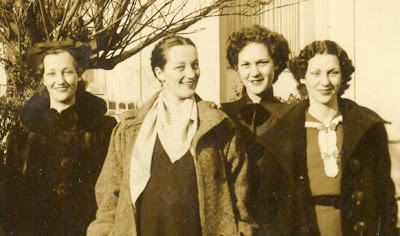 The Ujlaky sisters, circa 1936.
Ethel is the third from left.
Sadly, when Ethel reached her twenties, tragedy struck. Suffering from tuberculosis, she was admitted to Sea View Hospital on Staten Island. Ethel died in 1943, about a month shy of her twenty-third birthday.

Knowing the love that her sisters share, I was deeply touched when I learned the story of their beloved younger sister Ethel. They, her brothers, and her parents suffered a deep loss when she left them at such an early age.

At the time of her death a friend of the Ujlaky family wrote a beautiful poetic tribute to Ethel. I treasure the handwritten copy of Ida's poem that I have in my possession. It is a glimpse into the life of a dear family member whom I never had the chance to know. Here is Ida's tribute to her young friend:

You were so lovely, with your figure so slim,
Always, you were smiling, and you would never give in;
Though your pain was severe, still you never lamented
You put on a good front and appeared contented,
We know you had the courage, and tried very hard to win,
But your strength gave out, in your valiant fight
And you just had to leave your kin.
You have gone to rest to eternal peace and may God bless you
For a brave soldier, you were both stouthearted and true;
Your spirit is here although you’re gone
And the memory of you Ethel will live on and on.

~ Written in 1943 by Ida, friend of the Ujlaky family
Rest in peace, "dear sister Ethel".
For more on Ethel Ujlaky's story, including a picture of her bronzed baby shoe, see The footprint of little Ethel.