The love of fine cars: it's in the genes

It's not the kind of hereditary trait that I would ever be able to confirm with DNA testing. I've noticed for many years, however, that a love for fine automobiles runs in the Toth family.

Not to mention the many gems in more recent generations, Steve Toth was the owner of a number of humdingers. There was the 1956 convertible pink Cadillac that he bought used in 1957. His wife Mitzi surely enjoyed that car the most out of all of his vehicles, since she has always favored the color pink.

Back in 1943, when World War II was in full swing, Steve ordered a Fleetwood Cadillac. By the time his order was filled, four years had passed. He received his black Fleetwood Cadillac in 1947. (Here he is enjoying a "trunk-side view" from the Fleetwood with his young son Stephen.)

You may have read earlier about Steve's Reo Flying Cloud, the car that he owned during his courtship with Mitzi. They drove off to their honeymoon in style in that car in 1930. 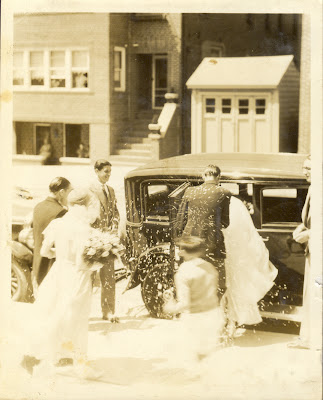 My hunch that this love for fine cars was hereditary was confirmed one day a few years back when I found Steve's father's World War I draft card. István Tóth had arrived from Hungary only a decade or so earlier, and now used the name Steven Toth. Although I don't believe he served in World War I, along with every other male citizen of eligible age, he was required to report to the United States government and fill out the appropriate papers.

Steven's World War I draft registration (pictured below) indicates his occupation at the time. Only ten years after Henry Ford had begun producing his Model T, Steven Toth, according to the document, was working as "Repairer" in the "Boston & M. Car Shop" in Charlestown, Massachusetts.

Another bit of circumstantial evidence or definitive proof? I'll leave it to you to decide whether or not this confirms the hereditary nature of this family's appreciation for fine automobiles.

In the meantime, Bill West is organizing a virtual genealogy parade over at West in New England. What better addition than a few fine cars to carry the dignitaries at the beginning of the parade? In honor of Steve Toth and his descendants, I'd like to submit the Reo Flying Cloud, 1947 black Fleetwood Cadillac and 1956 convertible pink Cadillac to the virtual parade.

Unfortunately, if they were attending, the Ujlaki family would probably have to walk alongside the parade. You see, Frank Ujlaki brought a car home to his family one day, more than likely sometime in the 1920's. In the process of introducing it to his wife and children, he somehow managed to plow into the fence with it. His wife Helen, concerned that the thing was too dangerous, made him take it back. He never owned another car again.

Frank did, however, work as a carpenter for many years. Part of the time he was a"wheelright" building wooden wheels. He also worked jobs buildling wagons and trucks out of timber. It took a lot of mathematical precision, talent and hard work to create the vehicles that he did. They would make very nice entries into any parade, I'm sure. But I don't think his wife Helen would let him drive them. 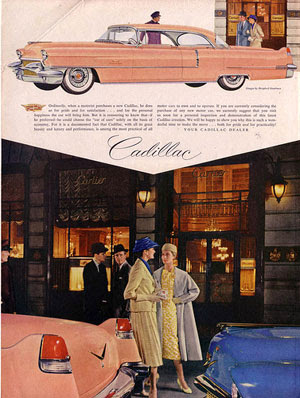 This post has been brought to you by Cadillac.

(Just kidding, but I thought you might enjoy seeing this 1956 ad for the pink Cadillac. It's not the convertible version, but it's some car, don't you think?)
Written by Lisa / Smallest Leaf