D is for Donja Dubrava and the Drava River

No matter what continent or country our ancestors called home, many of them found that the river was life. Waterway, food source, center of community life... Many grand modern cities had their start as a small fishing community at the edge of a river.


The little town of Donja Dubrava that my great-grandfather Ferencz Ujlaki came from never became a modern city, yet for centuries it has bustled with the busy-ness of a river's edge village.


"Donja Dubrava is an old crafts and trade centre at the east of Međimurje County in northwestern Croatia, at the meeting place of two grand rivers – the Mura and the Drava. This position, at the confluence of these great rivers, was an important natural factor that influenced the historical and geographical development of this trade city."


The area has seen continuous settlement from as far back as the early stone age, including throughout the Roman period. The Croatian people first arrived in the 7th century, with the first mention of the town's name (as Uj Dombo) in the year 1446. 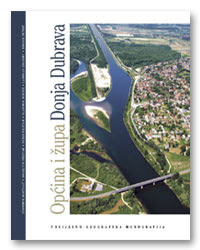 Though the maximum population (which occurred around 1910) only reached about 3,500 (there are about 2,300 residents today), the town has a proud heritage and a history book of its very own: Općina I Župa Donja Dubrava: Povijesno-geografska Monografija (The Municipality and Parish of Donja Dubrava: A Historical and Geographical Monograph), published in 2007 by Bartolić, Feletar, Feletar and Petrić.

According to the book, "Donja Dubrava developed into the most significant trading and crafts town in eastern Međimurje. The town served the central functions for the geographic region of eastern Međimurje, Legrad Podravina and the Zakan region in Hungary. Craft guilds were established, trade and hospitality developed and the town had a particular role in activities tied to the Drava River – milling, sieving for gold, fishing, boat trade and raft transport. From 1828 to 1940, the largest wood trading company operated in Donja Dubrava, transporting wood along the Drava from Pohorje to Osijek, Novi Sad, Belgrade and Smederevo. Agricultural activities, particularly the production of cereals and livestock breeding, were of great significance for the life and development of the town."

It's location at the confluence of two rivers has often brought much concern to the town during times of flooding. According to Ivan Vecenaj-Tišlarov in his book To My Homeland, "The Drava has never been timid and humble... The history of continuous changes in the Drava River course are both interesting and tragic." In fact, the neighboring village of Legrad (from which my great-grandmother emigrated) was previously on the same side of the river as Donja Dubrava. A serious flood in 1710 caused the river to change its course and placed the town of Legrad on the other side! For more about that story, and the history of the Međimurje area, visit my article Međimurje: Meeting place of rivers and cultures.

I've written this article as part of the Family History Through the Alphabet Challenge.  Follow me here at 100 Years in America as I try to keep up with the challenge to work through the alphabet while writing my family history. I'm way behind getting started, but here goes!