An attic, suitcases, and a window into a hidden world

In the process of closing down the Willard Psychiatric Center in New York's Finger Lakes over ten years ago, workers discovered a collection of suitcases in the attic of one of the facility's buildings. There were hundreds of suitcases, all enclosing remnants of the lives of many of the hospital's patients, and probably untouched since the day that each of these patients had entered the institution.

The contents of the suitcases and the stories that those contents told intrigued the New York State Museum. Staff members spent several years learning more about the stories of some of the people who had left these suitcases behind as they entered the Willard Psychiatric Center decades ago. In the process they asked questions such as: "Why were these people committed to this institution, and why did so many stay for so long? How were they treated? Why did most of the suitcase owners live out their days at Willard?"

According to a review by Gail A. Horstein, Ph.D., "The Lives They Left Behind is a unique and mesmerizing evocation of lives erased: an extraordinary portrait of ten of the many thousands of people incarcerated for decades in mental institutions. Forcibly removed (often on only the barest pretext) from their families and occupations...they disappeared behind asylum walls, never to be seen again." 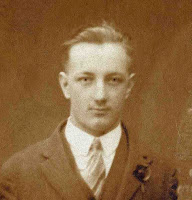 This project has a personal significance for the Ujlaky family. Our very own Frankie Ujlaky, believed to be a victim of encephalitis lethargica (sometimes called "sleeping sickness"), found himself institutionalized for seventeen years from the tender age of nineteen until his death at age thirty-six. His story and the questions surrounding his institutionalization, have always intrigued me. I have felt compelled to learn what I could about his life at Manhattan State Hospital on Ward's Island (once the largest psychiatric institution in the world) and Harlem Valley State Hospital in Duchess County, New York.

As the The Lives They Left Behind website phrases it, I want to be sure that Frankie is "memorialized in a respectful way that celebrates the richness of his life." I'm sure that his mother and father and other family members, who loved him dearly and suffered much because of the painful events that transpired due to his illness, would be happy to see that things have changed in the world of mental institutions. I am thankful to the researchers and writers of The Lives They Left Behind for their efforts toward bringing to light the value of the individual lives that were impacted by what was considered "modern medical care".

If you'd like to learn more about the project, please visit the The Lives They Left Behind website, pre-purchase the book which will be released in January 2008, or plan to see the exhibit at the New York Public Library through January or at other venues in the coming year.

Thanks to Dianne Haddad's Family Tree Magazine Genealogy Insider blog for the article that introduced me to this exhibit.
Written by Lisa / Smallest Leaf