I've often wondered what Christmases were like for my great-grandmother as a child growing up in what is today northern Croatia. What were the traditions of the season in her home and village when she was a six-year-old girl in 1890? I know that Christmas was predominantly centered around their Catholic faith and the way in which their village church celebrated the season. A big part of their celebration must have been the beautiful Christmas carols sung at church and around the village.

I was interested to learn, according to Darko Žubrinić on this Croatian history webpage, that there are more than five hundred Christmas folk songs in the Croatian language. Many of these originated as far back as the 12th-century. It is interesting that even though Croatia is a small country many of these folk songs have traditionally had different melodies in various regions while retaining similar lyrics.

Thankfully, many of these beautiful songs are alive and well. In fact, they have been performed on a worldwide scale thanks to a Croatian girls' equivalent of the Vienna Boys' Choir. In fact, many Europeans consider them to have surpassed the famed Vienna Boys' Choir. Zvjezdice (in English that translates to Little Stars), is an international award-winning girls' choir out of Zagreb which was selected as a Cultural Ambassador of the European Union Parliament. They are two-time world champions of the Llangollen International Music Festival of choir music. Zvjezdice has brought the music of Croatia to venues all throughout Europe and the United States. 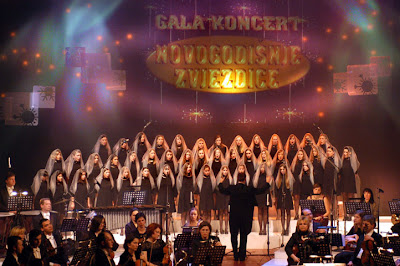 For a taste of Croatia's rich heritage of Christmas folk songs, listen to their renditions of Radujte se Narodi (Rejoice, Peoples) [mp3] and Svim na Zemlji mir veselje (Peace and Joy to All on the Earth) [mp3] (The choir is accompanied here by the Zagreb Soloists.)

Here are the words in Croatian to Svim na Zemlji mir veselje, thanks to this Croatian history webpage:

Check out Croatia Records' Christmas webpage for other suggestions for Croatian Christmas music, including some links to iTunes downloads.

For more on the music of Zvjezdice see this Cantus webpage or this Tamburaland webpage. I have been unable to find an official site for Zvjezdice. If anyone knows of such a site, please let me know.

Radujte se narodi (rejoice, peoples!) in the beautiful Croatian music of the season!

In the mood for more Christmas carols? Check out footnote Maven's "heavenly host" at A Choir of GeneaAngels. The angel to footnote Maven's right in the center of the choir is standing in for me.

Also see Thomas MacEntee's Advent Calendar of Christmas Memories at Destination: Austin Family. Check out his calendar daily this month for some good mini-memoirs of this nostalgic season. This post will be listed under Christmas Music on December 21.
Written by Lisa / Smallest Leaf