A pot of pšenica for Sveta Lucia

One legend about the Holy Family's flight to Egypt tells of a miracle that occurred to protect them from danger. One version of the story is retold in Frederick Hackwood's Christ Lore: The Legends, Traditions, Myths, Symbols, Customs and Superstitions of the Christian Church. The story is also illustrated within the beautiful 15th-century illuminated manuscript Les Très Riches Heures du Duc de Berry painted by the Limbourg brothers. (See the bottom frame of the image below. You may click on it for a larger view.) 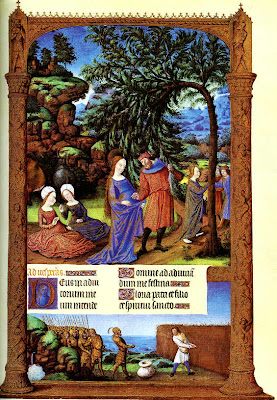 According to the Christus Rex webpage about the manuscript and the Christ Child's flight into Egypt, the story goes like this:

"While fleeing Herod's men, the Virgin and Child met a peasant sowing wheat. Jesus reached into the bag of seed and threw onto the path a handful, which immediately sprang into wheat as high and as ripe as if it were a year old. When Herod's soldiers arrived and asked the peasant if he had seen a woman carrying a child, he answered, 'Yes, when I sowed this wheat,' whereupon they gave up the pursuit." 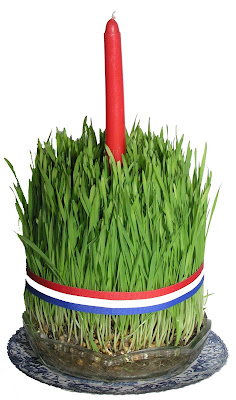 On December 13, Sveta Lucia Dan (St. Lucy's Day), wheat seeds are placed in small round bowls or dishes of water (no dirt is needed). If all goes well, the wheat will grow to about 6-8 inches tall by Christmas Eve. When it is tall enough, a red, white and blue tri-colored ribbon representing the Croatian trobojnic is tied around the wheat. The wheat may be a symbol of the soul's rebirth in Christ. This tradition also represents the hope that the new year's growing season will be a good one.

A candle is sometimes placed in the middle of the pšenica. The candle may symbolize Christ, the Light of the world. According to Christmas in Croatia by Andrea Janekovic, in some regions "a small glass with water and oil is placed in the center of the wheat, on which a floating wick (a dusica - from the word for soul, dusa) is placed. Its glow can be seen through, rather than above, the wheat. The glow represents the soul within each of us."

According to Adriatica.net's Croatia's Christmas Traditions in the Past & Nowadays, the wheat is planted or given to birds after Christmas. Croatian tradition dictates that nothing from Christmastime should be thrown away.

Although it is a small country, different areas of Croatia celebrate Christmas in many different ways. In fact, in some parts of the country, Sveta Lucia may deliver gifts to children on her feast day.

If you would like to grow your own Bozicna Pšenica, visit a local farm supply or similar store and purchase seed wheat. If you are reading this on December 13, today is the day. A happy Sveta Lucia Dan to you!

I'm off to go plant my wheat seeds...

The topic for this post was inspired by Thomas MacEntee's Advent Calendar of Christmas Memories at Destination: Austin Family. Check out his calendar daily this month for some good mini-memoirs of this nostalgic season. This post will be listed under Christmas Grab Bag on December 15.