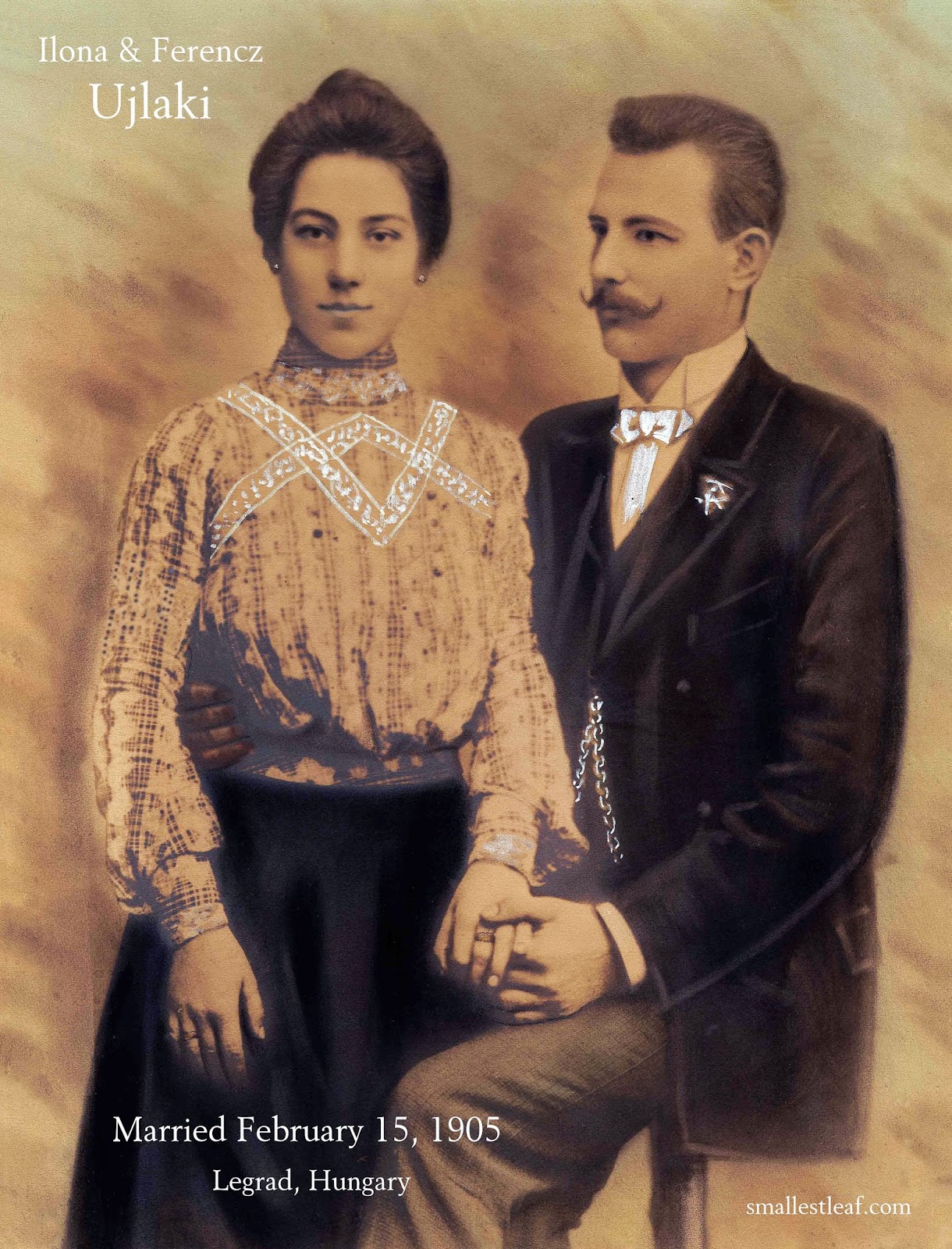 On a cold Wednesday 110 years ago today 25-year-old Ferencz Ujlaki married his bride, 20-year-old Ilona Bence, in the Catholic church of a small Croatian village in Austria-Hungary.

Their life together would carry them to New York City where they would Americanize their names to Frank and Helen, raise six children, and leave a host of descendants.

Yesterday a cousin of mine and I (Hi, Ric!) worked to calculate the current count of just how many descendants Frank and Helen have as of this, their 110th anniversary. We are happy to report that - tada! - the number is actually more than 110!

In honor of this very special anniversary and in hopes that we, their descendants, will not forget the lives of Papa and Grammy Ulaky (as we now know them) and the sacrifices they made that altered the courses of so many of our own lives, I'd like to briefly share their story once again.

Ferencz and Ilona were born in different villages just across the Drava River from each other in what is now northern Croatia. At the time Donja Dubrava (formerly Alsodomború, where Ferencz was born in 1879) and Legrad (where Ilona was born in 1884) were considered part of Zala megye (Zala County), Austria-Hungary. Presently this area is in Croatia right on the border of modern Hungary. Read more about the fascinating history of their home villages in Međimurje: Meeting place of rivers and cultures. 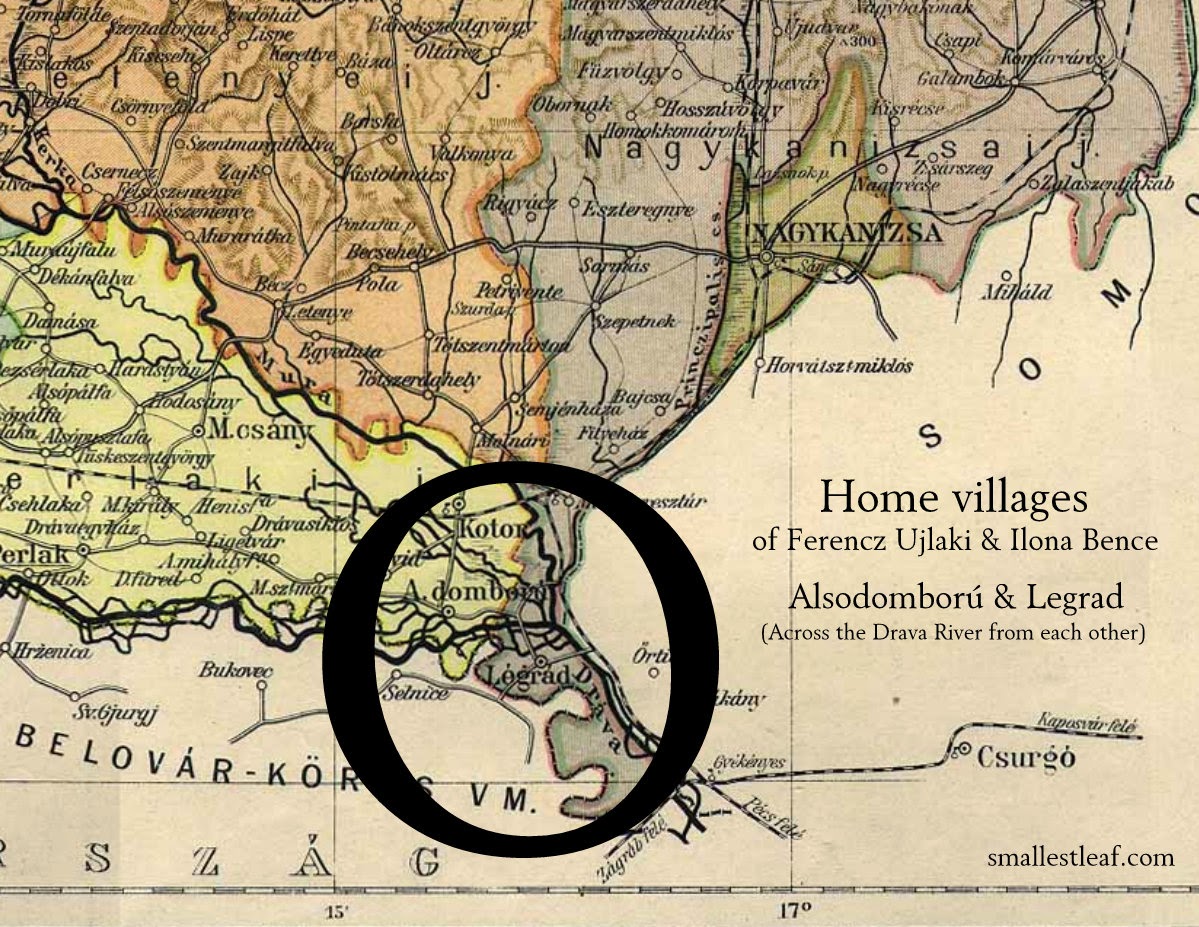 Holy Trinity Catholic Church (Župa Presvetog Trojstva), Legrad's parish, was the home church of the Bence family. That is where Ferencz and Ilona married on February 15, 1905. 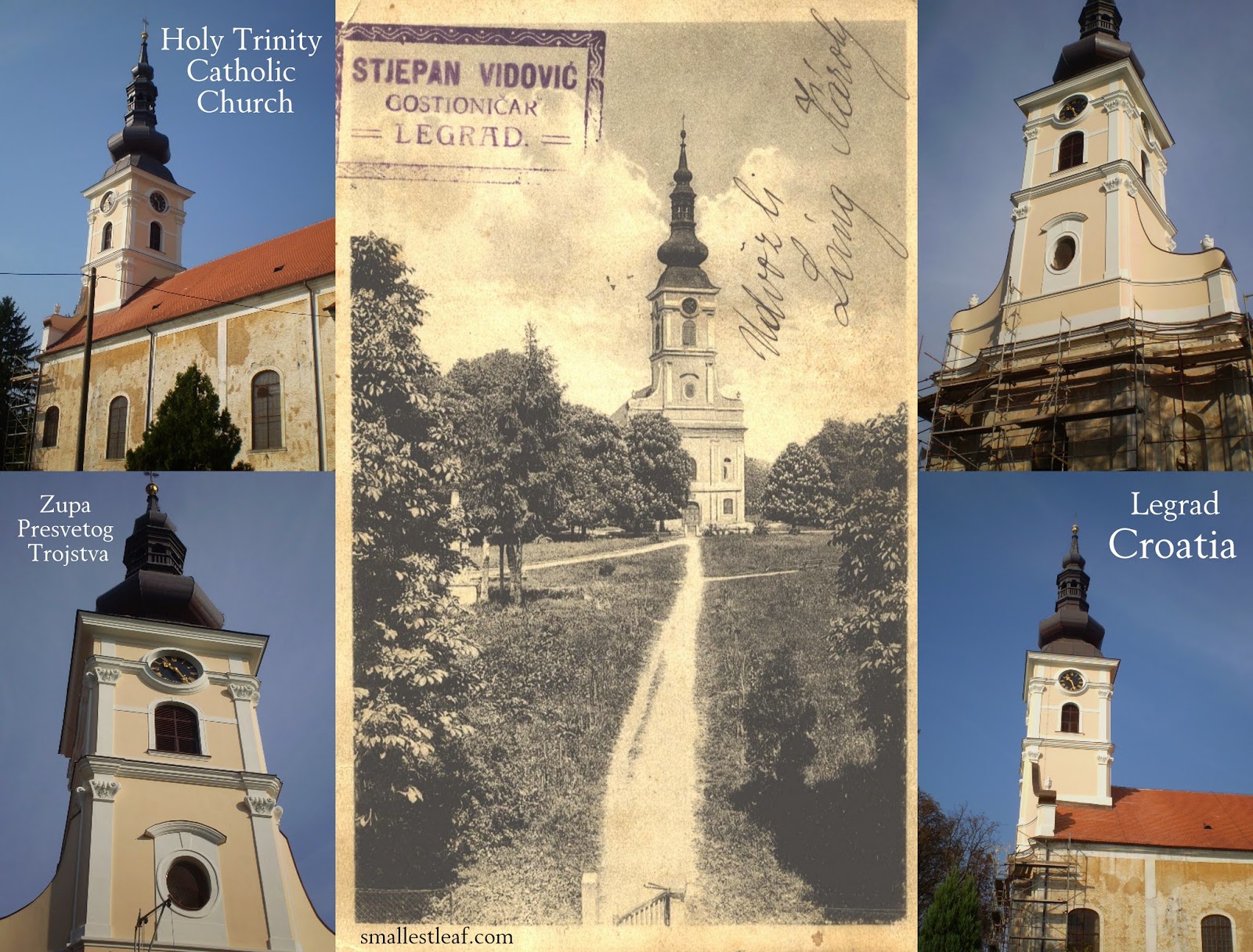 Their marriage record includes lots of information, including their birthdates and birthplaces, parents' names, occupations, etc. Both the bride's and groom's fathers are listed as földműves (farmers). Ferencz himself is listed as bognár: a wheelright. I was happy to see that the document has the original signatures of both the bride and the groom (see the right hand side of the photo below). 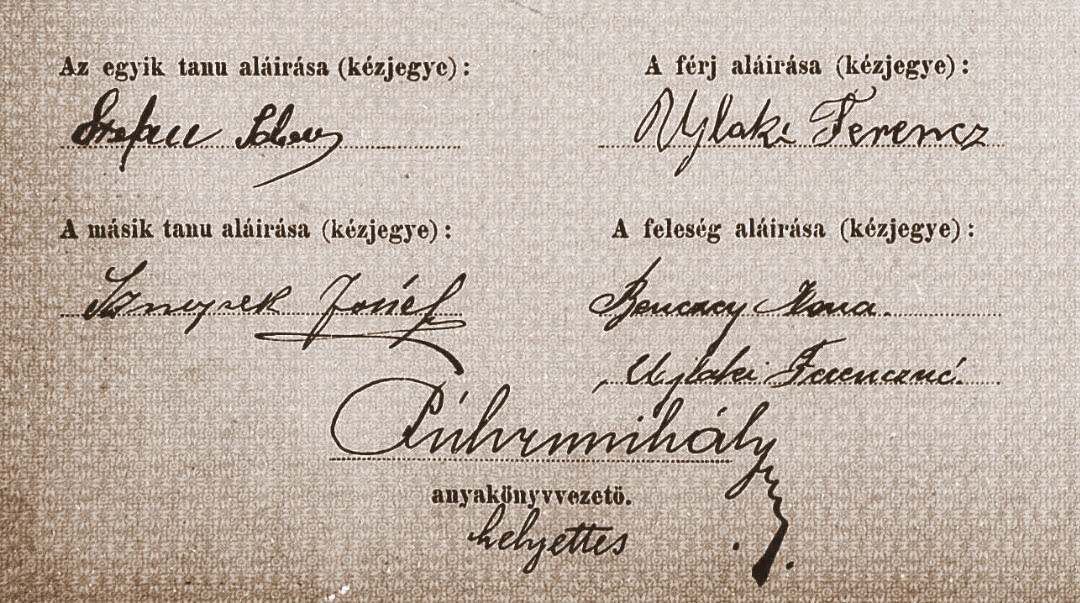 Within the first year of their marriage, by the fall of 1905, Ilona was expecting their first child. As one of the couple's daughters shared with me, Ferencz hastened his plans to immigrate to America before the baby was born: he was afraid that he wouldn't be able to bring himself to leave after his or her arrival. He left the port of Antwerp for New York on April 7, 1906. Baby Ferencz was born just a month later on May 9, 1906. Ilona and her baby stayed behind for almost three years. They left the port of Rijeka (Fiume) on February 13, 1909, joining Ferencz in New York City on March 2, 1909. Theirs was a difficult journey, but the small family was finally reunited.

Following their firstborn, Ferencz (later called Frankie), four daughters were born followed by another son. The girls - Ilona (Helene), Marie, Wilma, and Ethel - were born while the family lived in the Hungarian neighborhood of the lower East side of Manhattan. Their youngest child, Kasmir, was born after they moved to Staten Island into a home built by Frank with the help of friends.

Ferencz and Ilona's days were filled with the struggles of new immigrants trying to raise children, make a living, and somehow fit into the new culture in which they found themselves. Theirs was a difficult life, as I realized with even more clarity when I created a short timeline of her Ilona's sorrows over just a 33-year period. Helen lived to be 97. Sadly, Frank succumbed to tuberculosis at only age 60.

Their marriage had lasted only 34 years, yet today we celebrate the 110th anniversary of their union and the more than 110 descendants that are here today thanks to their love and sacrifice. Their wedding took place a day after February 14. That date has two special memorial celebrations in the Catholic Church: St. Valentine's Day (on which today we celebrate love) and the memorial of Sts. Cyril and Methodius, the "apostles to the Slavs" who are known for bringing Christianity to the Slavic peoples (my Ujlaki and Bence ancestors included). The saints we celebrate on this day make it easy for me to remember the anniversary of my great-grandparents on February 15. 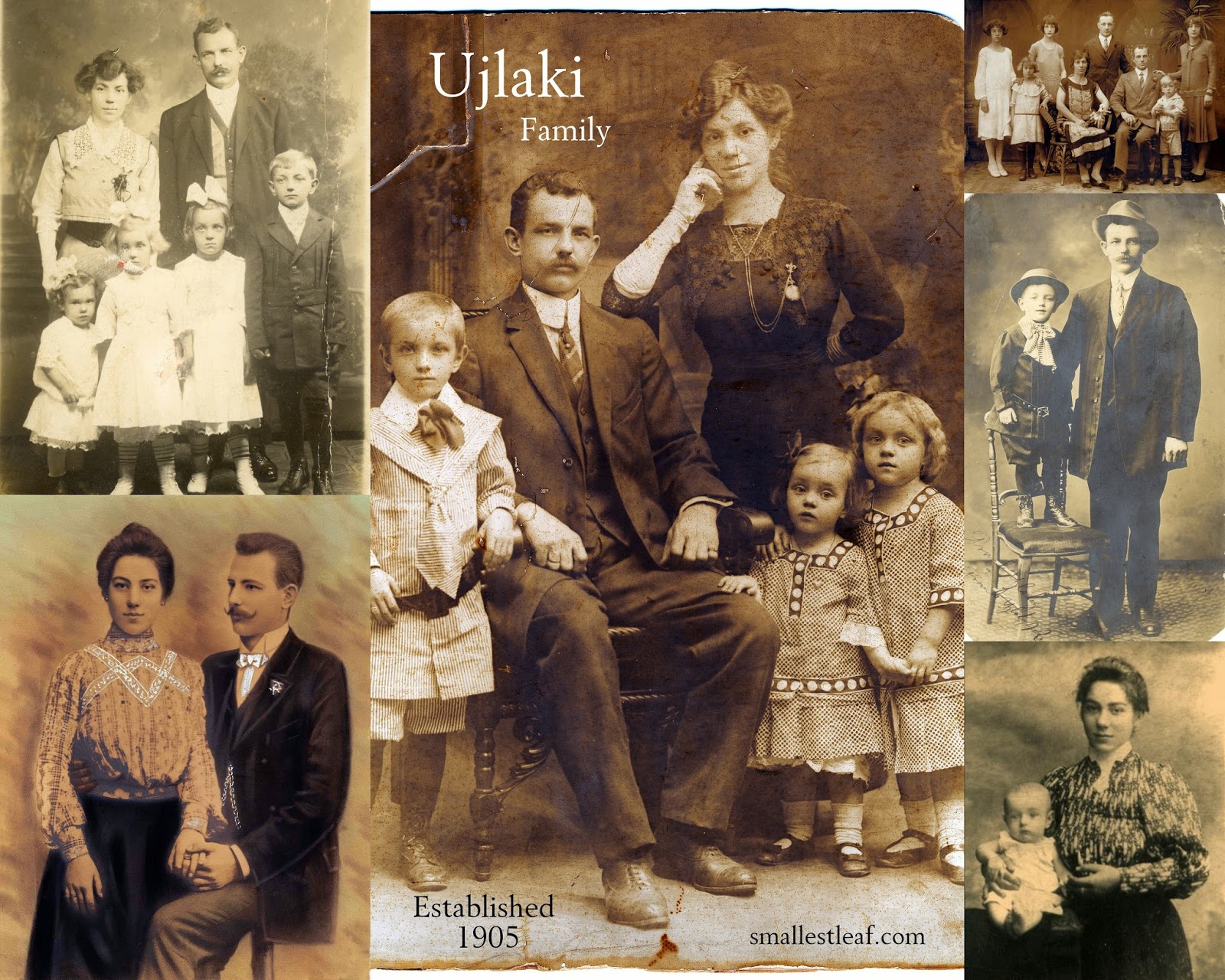 Frank and Helen (Bence) Ujlaki
Marriage at a Glance

This article is included as part of the 52 Ancestors in 52 Weeks Challenge organized by Amy Johnson Crow. The theme for Week 7, in which this article falls, is "Love". [Note: Hat tip to Donna Pointkouski of What's Past is Prologue for the summary format I've used at the end of this article.]