Ferencz Ujlaki and the trip he didn't take: Part 2

If you read Ferencz Ujlaki and the trip he didn't take: Part 1 you know that I had some work to do in order to solve the mystery of my great-grandfather's appearance on the passenger list for the ship S.S. Kroonland which departed Antwerp on April 2, 1906. 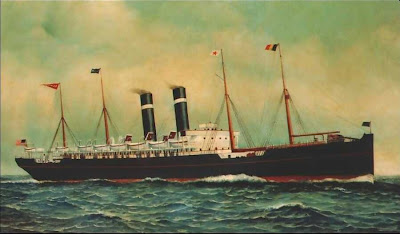 S.S. Kroonland
Listed but noted as "not on board", was he on the ship, but logged somewhere else, or did he postpone his trip and take another vessel?

I had originally thought that another ship's passenger list may have had my Ferencz Ujlaki listed (the S.S. Ultonia which departed from Fiume on April 12, 1906), although it wasn't clear if this was the right man.

Just last week fellow genealogist Jennifer Trahan had kindly done a search for me and found Ferencz listed on the S.S. Kroonland. This left me with a mystery since he was clearly marked as "not on board".

Now, with a find from another fellow genealogist, Donna Pointkouski, I have one more passenger list to evaluate with Ferencz Ujlaki's name on it - and this appears to be the very ship on which he sailed to America. The S.S. Zeeland departed Antwerp on April 7: five days after the S.S. Kroonland.

It looks very possible from examining the facts that this is the trip that Ferencz Ujlaki actually took. It is probable that he changed plans for some reason, got off of the S.S. Kroonland, then took the trip five days later out of the same port on one of the S.S. Kroonland's sister ships: the S.S. Zeeland. 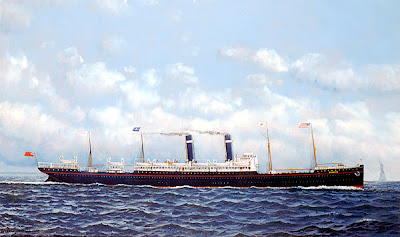 At this point I can only wonder about his reasons, but the progression of events makes sense.

Unlike the original S.S. Ultonia passenger list that I found, both the S.S. Kroonland and the S.S. Zeeland logs indicate similar plans for their respective Ferencz Ujlakis following arrival in the United States. Both lists indicate plans to meet "friend Stefan S......" and settle in New York City . I am still working on deciphering the friend's name and address. Here it is below on the S.S. Kroonland and S.S. Zeeland manifests:

The S.S. Kroonland indicates that Ferencz had $13 in hand; the S.S. Zeeland (five days later) appears to indicate $5.70 in his possession (although this is not completely clear). If this is true, it makes sense. He had to have spent a little money in those few days that he waited to board the second ship. 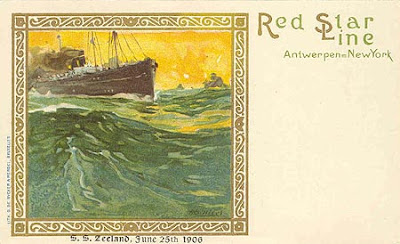 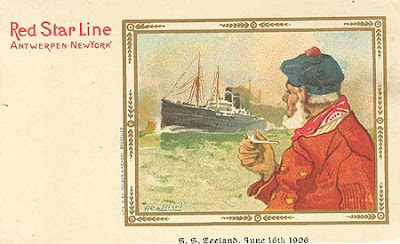 1906 Red Star Line postcards of the S.S. Zeeland
The facts validate that the men on both passenger lists must have been my great-grandfather, leaving his native village of Legrad to begin a new life in America before his wife and soon-to-be-born baby were to join him there.

Another family history mystery appears to be partially solved, thanks to a little help from some friends.

This article was originally published here at 100 Years in America on February 8, 2009. I have republished the story of my great-grandfather's passenger list in honor of the new Red Star Line Museum which is currently scheduled to open in Antwerp, Belgium next year.