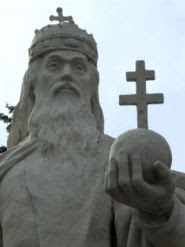 My beloved son, delight of my heart, hope of your posterity, I pray, I command, that at every time and in everything, strengthened by your devotion to me, you may show favor not only to relations and kin, or to the most eminent, be they leaders or rich men or neighbors or fellow countrymen, but also to foreigners and to all who come to you. By fulfilling your duty in this way you will reach the highest state of happiness. Be merciful to all who are suffering violence, keeping always in your heart the example of the Lord who said, "I desire mercy and not sacrifice." Be patient with everyone, not only with the powerful, but also with the weak. Finally be strong lest prosperity lift you up too much or adversity cast you down. Be humble in this life, that God may raise you up in the next. Be truly moderate and do not punish or condemn anyone immoderately. Be gentle so that you may never oppose justice. Be honorable so that you may never voluntarily bring disgrace upon anyone. Be chaste so that you may avoid all the foulness of lust like the pangs of death. All these virtues I have noted above make up the royal crown, and without them no one is fit to rule here on earth or attain to the heavenly kingdom.

Email ThisBlogThis!Share to TwitterShare to FacebookShare to Pinterest
Labels: Hungary