The way I walk I see my mother walking,
The feet secure and firm upon the ground.
The way I talk I hear my daughter talking
And hear my mother's echo in the sound.
The way she thought I find myself now thinking,
The generations linking
In a firm continuum of mind.
The bridge of immortality I'm walking,
The voice before me echoing behind.

When I first saw my great-great-grandmother Magdalena's portrait I felt as if I was looking at a face that was strangely familiar. I had known her name and felt a connection to her as I had wondered about her life and how she had raised her children in the late 19th-century in Legrad (then Hungary). Her daughter Ilona had been very close to her own daughters throughout their adulthood, yet as a tender-aged 24-year-old new mother she had left her home country and Magdalena behind. I often wondered about Magdalena's feelings about her daughter's emigration. Had she ever expected to see her again?

Though Magdalena lived to the age of 97, she never once was able to see Ilona again. Her American grandchildren never had the chance to meet her although they and even their children were well into adulthood by the time of her death.

I remember being told that at one point Ilona (now Helen in America) got impatient with her husband Frank's devotion to card-playing and threatened to "go home to her mother" if he didn't give it up. I wonder how many years had passed until Ilona had realized that she would never see her mother again. At least they were able to keep in touch through letters and pictures sent across the Atlantic. 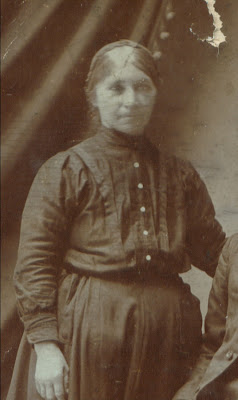 Magdalena's other children, two daughters and a son, remained in Legrad and lived out their lives there. Her daughter Katarina married Juro Simon, her daughter Louisa married Stjepan (Istvan) Vidaković, and her son Adam married a woman named Katarina. By the beginning of the 21st-century, Magdalena and her husband Stjepan (both born in the mid-19th-century) had more than 150 descendants in Croatia and America.

Magdalena passed away in 1957 in Legrad (then Yugoslavia) at the age of 97. I treasure the photos that I have of her funeral and the family that surrounded her as they said their last goodbyes to their beloved mother, Magdalena.


I can see clear family resemblances to many of the people in this photo, but I have not yet been able to identify all of them for certain. If you recognize anyone in the picture, please leave a comment or send an email.
For more poetry by Dorothy Hilliard Moffatt, see Time for Remembrance: Poems and Too Many Apples.

For more photographs that embody a mother's love, visit footnoteMaven's 1st edition of I Smile for the Camera.
Written by Lisa / Smallest Leaf

Email ThisBlogThis!Share to TwitterShare to FacebookShare to Pinterest
Labels: I Smile for the Camera Carnival, Legrad, Magdalena (Bedenices) Bence, Poetry