It was a banner year for the Wright Brothers and their flying "aeroplane".

It was a year of tremendous change for the world and for the nation that had seen the Louisiana Purchase and Lewis & Clark's trek across the west only a century before.

Where was my family?

That was the question I asked myself after reading Jim Rasenberger's thought-provoking article in the January 2008 issue of Smithsonian Magazine. In 1908: The Year That Changed Everything, Rasenberger gives us a look back at the world one-hundred years ago. A nice summary of the article via the editorial department is located here.

I don't have the opportunity as Rasenberger did to spend several weeks reading the entire collection of New York Times back issues from the year 1908. (In his words, "It was like living in this 1908 time machine.") Nor do I know everything about my family members' lives that year. But what I do know makes me want to learn more.

Here's a little summary of the year from the viewpoint of the Ujlaki family:

Ferencz Ujlaki - almost 29 years old, Ferencz was living out his dream of becoming an American immigrant. He had left his young expectant wife behind in 1906 to go ahead and prepare a new life for her in the "new world". He arrived at Ellis Island, more than likely via the ship Ultonia. A resident of the Hungarian district of Manhattan, Ferencz was corresponding with her via letter and sending money home to Hungary for her support. He must have been anxiously awaiting her arrival in New York. It would be another year before she would arrive. 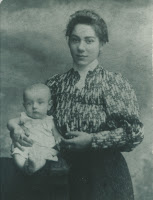 Ilona Ujlaki - just shy of 24 years, Ilona was mother to her young son, Ferencz, who was 19 months old in January of 1908. Ilona was preparing to join her husband in America the following year. During this time of waiting she was living first with her mother-in-law, Terezija Ujlaki, in Legrad.

Stjepan (age 51) & Magdalena Bence (age 48) welcomed Ilona and little Ferencz back into their home, supposedly after Ilona had found her mother-in-law hoarding the money Ferencz had sent from America. Ilona spent her remaining days with her parents before emigrating to join her husband.

Adam Bence - Ilona's younger brother was 20 years old in 1908. Two other sisters, Katarina and Louisa, were also living in Legrad. Ilona would correspond with Adam and his son Stjepan for many years throughout her life in New York. None of her siblings followed her to America. Instead, they remained in the Legrad area and their descendants live in Croatia today.

There were others, new Hungarian immigrants to New Jersey, who would later marry into the Ujlaki family. In 1908 they were beginning their new lives there just as Ferencz was trying to carve out a new life in Manhattan.

Thinking back to 1908, I can't help but compare that year with the present. In the words of Carey Winfrey of the Smithsonian editorial department as she summarized Rasenberger's article:

So how does one hundred years ago compare to the present? In some ways, particularly in urban America, very familiarly. "They rode the subway to work. They had electricity. They went to see movies, Broadway shows. They were interested in things we're interested in. They worried about diet. They worried that Christmas was becoming too commercialized." And yet, it was also a very different world. The disparity between rich and poor was vast, as it was between classes, sexes and races.

We, the descendants of those living out their dreams in 1908, can see with hindsight what a different world they lived in.

Want to take a further look back at 1908 through the articles written by others who responded to my question? Read Snapshots of the world back in 1908 and enjoy a small cross-section of hundred-year-old history. Enjoy your trip back in time...