In the world of the Hungarian people, a man named István Tóth is as common as an American named John Smith. Take that Hungarian and transplant him to America, and he becomes Stephen Toth - not quite as common as the John Smiths who have become his new neighbors, but still just as difficult for his great-granddaughter to distinguish from the many other Hungarian-Americans named Stephen Toth.

My genealogical search for my great-grandfather has been (and continues to be) a challenge for me. His common Hungarian name has sometimes made it difficult for me to track him down. Born in 1874 in the village of Mezőkeresztes in what was then the district of Mezőkövesdi in Borsod County, Hungary, István Tóth was one of two babies born of the same name to appear in the Roman Catholic Church records of that locality during a period of several years. A few clues such as his birth month (as listed on later records), his family's residence, and the name of one of his siblings helped me to narrow my search down to the right István Tóth. Here he is listed in the Roman Catholic parish registry for Mezőkeresztes in 1874:


As an adult, my great-grandfather traveled back and forth from his home and family in Gelej, Hungary (a village very near to his birthplace of Mezőkeresztes) across the Atlantic several times before finally settling in America with his family.

Here listed within one of his daughters' birth records in 1903 as a törvényes atya (the legal father), it is interesting to note István's lakóhelye (place of residence): "jelenleg Trenton Amerika", meaning "currently Trenton, America".


As far as I have determined, István usually traveled alone - his wife and children made their voyage to America separately on another ship after what I assume was István's last visit back to Hungary. My great-grandfather's common name has made it difficult for me to narrow down his passenger lists from the many other István Tóths that made similar trips during the years that he traveled. Thanks to his children's birth records, I know that he made at least two trips to America before finally settling in Trenton. I have unfortunately not been able to confirm even one ship passenger manifest for him yet.

His wife and children, however, were easy to recognize once I found them. (Read more of their story at A little boy, a big ship and a brand new world, Lajos long forgotten: An immigrant baby's story, Update on baby Lajos: His arrival at Ellis Island, and On babies and trans-Atlantic crossings).

István, who became Steven/Stephen in America, first settled with his family in the U.S. in Trenton, New Jersey. He is one of five Stephen Toths that resided in the city during the year 1908, according to the city directory. Another instance with too many possibilities to narrow down easily thanks to Stephen Toth's common Hungarian name!

My real dilemma with my great-grandfather has been my search for records that tell the story of the end of his life. Various records in the early 20th-century (censuses and city directories) indicate his wife as a "widow". Interestingly enough, these records alternate between other records in intervening years where he is listed with his family or where new children were born into the family.

Note the 1908 and 1909 city directory listings for what may be my Stephen Toth and his family in Trenton, New Jersey. Stephen is with the family in 1908, but Mary, a "widow", appears at the same address in the 1909 directory.


1908 Trenton city directory listings for Toth
1909 Trenton city directory listings for Toth
A year later what is clearly my Toth family appears residing in Trenton, father included, in the 1910 U.S. Census.
This pattern occurred later within city directories for the Toth family in Massachusetts. Mary appears to have sometimes labeled herself a "widow" when questioned about her family, although her husband was probably just absent.
It appears that Stephen Toth was not always "around", although he appears to have remained a presence in his family's lives for many years. He is conspicuously missing from this formal family portrait taken of the Toths about 1929. 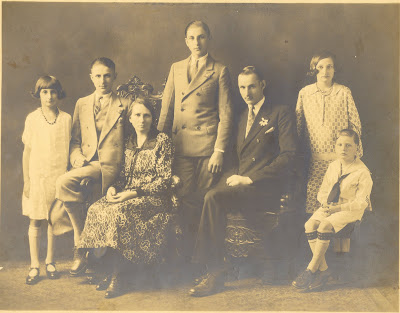 I have word, however, from one of his daughter-in-laws that Stephen Toth was alive and well in New Jersey at some point during the 1930s. Although the rest of his family was living in Massachusetts at the time, she remembered visiting him there in New Jersey with her husband, Stephen's son.

My questions: Where did my great-grandfather Stephen Toth spend the rest of his life after he apparently left his family in Massachusetts? How long did he live? Where and when did he die, and where is he buried?

These questions have troubled me for some time. There does not seem to be a Social Security record for him. Because of this and because of his birthdate, I assume that he may not have lived past the 1930s or 1940s.

Did Stephen Toth resettle in Trenton, his first American city of residence, after leaving his family in Massachusetts? I may never know the reasons why he made the choices that he did, but it would be nice to at least finally know the genealogical facts regarding the end of his life.

Great-Grandpa, whom so many of your family members never knew: here's hoping that I'll finally find your whereabouts and learn a little more about the missing story of your life.

Thanks to Amy Lenertz Coffin of We Tree for the suggestion of Weekly Genealogy Blogging Prompt #12: to post a genealogy "brick wall" problem to share with others. This genealogist would be very grateful to anyone who might be able to provide any further clues on the life of Stephen Toth (1874-?) of Mezőkeresztes and Gelej, Hungary; Trenton, New Jersey; and various towns in Massachusetts (including Wilmington, Malden and Cambridge).
Written by Lisa / Smallest Leaf