"Mazes, windings and turnings": a little digression on maps

Before I get too far from the subject of maps, I couldn't resist sharing with you a few other interesting map resources and a fascinating series of exhibitions currently on display for map lovers like myself.

The city of Baltimore, Maryland is the place to be over the next couple of months as thirty-four area arts and cultural organizations participate in a Baltimore Festival of Maps and, as their website explains, explore "the rich history and contemporary interpretations of maps and the mapping process". The central focus of the festival (and the originator of its idea) is the exhibit at the Walters Art Museum entitled Maps: Finding Our Place in the World. According to Will Noel, curator, "it is the greatest map show in fifty years." The website explains that "the exhibit will feature a variety of unique, rare, and often beautiful artifacts, including maps on cuneiform tablets, medieval maps, manuscript maps by explorers, globes, maps of areas all around the earth, and maps of nowhere: utopias and imaginary maps. Highlights include three maps by Leonardo da Vinci, J. R. R. Tolkien’s map of Minas Tirith, and Thomas Jefferson’s map of the proposed contours of the states of the Union."

You can view some of the special maps that are a part of the exhibition or take a tour of the exhibit guided by its curator below:

The video above (which provides a nice overview of the exhibit) is part four of the five-part tour of the Walters' map exhibit. You can also view parts one, two, three and five.

As stated on the Urban Cartography blog, "Most people think of maps as useful tools to get us somewhere, but 'they also tell us who we are. They reveal the priorities and technologies of our own civilizations and those of the past,' said William Noel, curator of manuscripts and rare books and curator of the Maps exhibition at the Walters."

I found many of the maps in this exhibit interesting, such as: 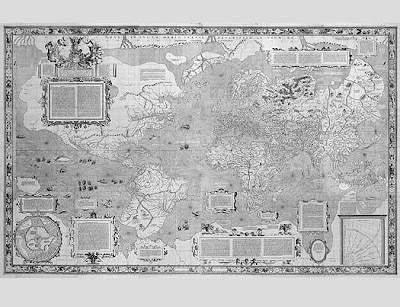 Genealogists can benefit in many ways from perusing maps of all kinds. I found interesting the 1895 map in this exhibit (shown below) of one west-side Chicago neighborhood, among the first of its kind of map, which shows the earnings and ethnicities of many city-dwellers at the time. 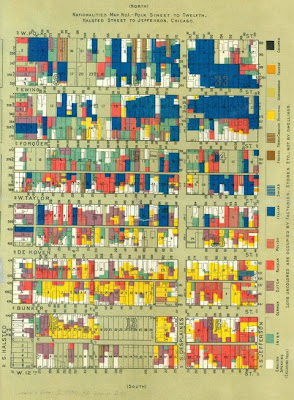 If you are a map lover like myself, you might enjoy visiting the following locations "on the map" in the world of blogs and websites:
And a final quote for you with appreciation to all the "experienced travelers" that have created maps of the many corners of the world:

“The world can doubtless never be well known by theory: practice is absolutely necessary; but surely it is of great use to a young man, before he sets out for that country, full of mazes, windings, and turnings, to have at least a general map of it, made by some experienced traveler.”