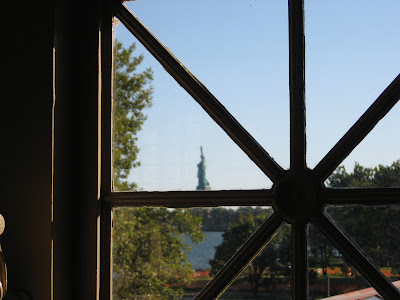 Image copyright © 2007 by Smallest Leaf Press. All Rights Reserved.
A mother myself, it is heart-wrenching for me to imagine the experiences of my great-grandmother back in 1909 at the age of 24. Her husband had left their home in Hungary in 1906 to smooth the way for his young family's new life in America. Ilona stayed behind, expecting their first child and intending to follow as soon as she was able.

After what must have been a tearful goodbye, Ilona and her 2-year-old son Frankie sailed from February 13 to March 2, 1909 on a trying 18-day journey from Fiume, Hungary (which is now Trieste, Italy) to New York in the steerage section of the oceanliner Carmania. At some point on the journey, Frankie became ill with measles. No easy trip for a mother and her toddler. Then, finally on Ellis Island, the unthinkable for a mother with a sick child in a foreign land: Frankie, to be treated for measles, was separated from her.

This part of my great-grandmother's story has always intrigued me. What did they really experience during their stay on Ellis Island? How many days were she and Frankie there? At what point were they separated and where were they placed? I've never heard mention of Ilona being sick, but their Ellis Island ship manifest indicates via stamp that both were "IN HOSPITAL", then "DISCHARGED". When were they finally reunited and released for arrival into New York and how did they contact her husband Ferencz?

One of the items at the top of my to do list of family history research projects had been to contact Ellis Island and get information about the hospital records for young Frankie, our measles patient there back in 1909.

It turns out that Lorie Conway, a filmmaker who set out to document the history of the Ellis Island hospital, spent almost a decade searching for patient records such as Frankie's. She found one.

Were they lost by someone "cleaning up" after the hospital closed its doors in 1951 and before the Coast Guard shut down its final operations in 1954, leaving the island abandoned? Or were they discarded more randomly during the incredibly busy years of operation? (In 1921 alone the hospital saw an average of 1,500 immigrants a day for a total of 16,666 patients that year - the busiest year for Ellis Island medical care.) One more theory: could they possibly have been tossed during renovations before the 1990 re-opening of the main hall as the Ellis Island Immigration Museum?

Maybe the records will eventually turn up in a federal records facility somewhere. In the meantime, we have a fascinating look into the experiences of patients on Ellis Island through Conway's film and companion book: Forgotten Ellis Island. 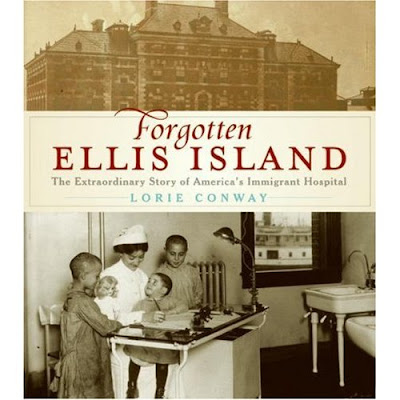 Inspired by a 1998 article by Clyde Haberman in The New York Times Magazine about Ellis Island's importance to our history as a nation, Conway set about to document the history of the "other side of the island". Restoration of the main hall had opened the north side of Ellis Island to visitors, but the other areas, including the hospital buildings on the south side, had remained just as they were left in the 1950's (although now overgrown with trees growing through floors, walls and ceilings in disrepair, etc.).

Conway's decade-long project is a treasure for all Americans, particularly those of us with ancestors who passed through Ellis Island. That includes roughly 40% of Americans today.

The book and film bring to life a period in history that, though fairly recent, seems worlds away from our own. Outdated medical practices, classification of people of different ethnic backgrounds based on eugenic beliefs, and fear of the outbreak of strange diseases brought in with these foreign patients drove the organization of the facility. But it was a place that brought healing and hope to many, a place where new arrivals, worn and weary from travel at sea, found kind care and a chance at a new life.

Looking back at the past with the vision that Forgotten Ellis Island brings to us provides not only an understanding of what many of our forebears may have experienced, but a perspective on our own times. And it refuses to let us ignore our own prejudices of immigrants in our world today.

The film Forgotten Ellis Island premiered in New York and Boston in October. If you are in the Boston area, you can view it at The Boston Public Library on December 6.

If you would like more information about plans for the restoration of the remainder of Ellis Island, including the hospital buildings, take a look at Save Ellis Island.

Special thanks to Tim Agazio at Genealogy Reviews Online and Chris Dunham at The Genealogue for their mentions of Forgotten Ellis Island.
Written by Lisa / Smallest Leaf