On new countries, new babies and a wedding

Let's recap a little bit of the life of Ferencz Ujlaki and his wife Ilona as a newly married couple before we get to the next part of their journey: their life in New York City.

At that point, the little family was reunited and the new life that Ferencz had begun in Manhattan was continued along with his wife and young son. As I mentioned here, I cannot read the information on the Carmania ship manifest that indicates the address to where Ilona was going upon arrival. It must have been the address where Ferencz was living in Manhattan, but I have not been able to read it.

The year after Ilona's arrival in New York, the 1910 U.S. Census was taken: the perfect opportunity for us to learn where this young family settled. However, I have not been able to find them in the census for this year. If anyone of you would like to take a look yourself, please let me know if you find them! (Their names may be mispelled and not appearing on the indexes that I have used to search.)

We do know that the couple's second child, also named Ilona (later known as Helene) was born in 1910, a little over a year after her mother and brother's arrival in New York. We have a beautiful portrait of this young family at the wedding of Peter & Maria (Gaspar) Gres. Although I'm waiting for confirmation from church records, I believe that the couple was married at St. Stephen of Hungary Catholic Church in Manhattan sometime in 1913. 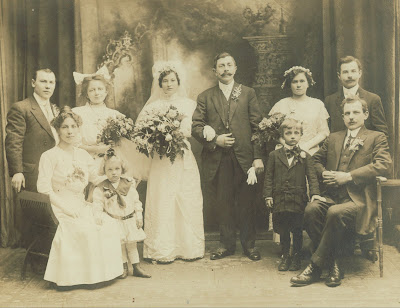 Pictured in the wedding are portrait along with the bride and groom and some unknown wedding attendants are Ilona seated on the left and Ferencz seated on the right. Little Helene and Frankie are standing near their mother and father, respectively.

"Mrs. Grace", as I understood her name when I was a child, was actually Ilona's first cousin once-removed. (Ilona the mother, not Ilona the daughter later known as Helene.) Ilona's mother, Magdalena (Bedenices) Bence, was the sister of Maria Griesz' grandmother. (If I've confused you with this family tree, try writing it out on paper or plugging it into Family Tree Maker software - visual aids are very helpful when it comes to family history.)

This beautiful portrait amazes me for several reasons - Ilona's elaborate hairstyle and the beautiful clothes that she and her husband and children are wearing. As new immigrants, I'm sure that they had very little in terms of money and possessions, but they did a beautiful job with what they had. The children must have been much admired at this wedding. Sadly, Peter & Maria Gres never had the blessing of having children of their own. Instead, Maria spent many of her later years living with Ilona at the home of Wilma and her family and had plenty of opportunity to enjoy the comings and goings of many generations of family members, myself included.
Written by Lisa / Smallest Leaf