...was the address of the Ujlaki family in 1920. It is the first appearance of Ferencz & Ilona in a U.S. Census that I could find, although I'm sure that they must have been counted in the 1910 U.S. Census (although I cannot find this record, possibly because of spelling errors or similar difficulties). 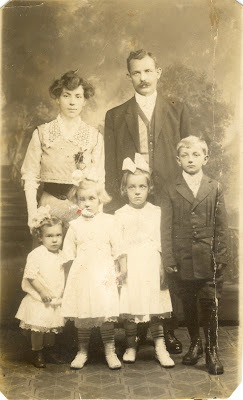 We have a beautiful family portrait of the Ujlaky family just a few years before the 1920 census. (Click on the picture to view the family up close.) The portrait was probably taken around 1916 or 1917. Pictured are Helen & Frank Ujlaky (formerly Ilona & Ferencz Ujlaki) with their children: Wilma, Mitzi, Helene & Frankie. The back of this portrait is actually a postcard addressed to Mr. Maik Gayer at 433 E. 16th Street. I assume this was a neighbor of theirs.

By 1920, Frank had been in the U.S. for fourteen years. Helen and little Frankie had been in the U.S. for eleven years. As I mentioned in my previous post, Frankie was now 13 years old, and had three little sisters listed in the census along with him: Helen (whom we know as Helene) age 9, Mary (Mitzi or Marie) age 8, and Wilhelmina (Wilma) age 6. (According to Helen's grand-daughter Helene Gregory Helm, the couple also had a baby named Anna who was stillborn in 1918.)

The census lists Frank's occupation as carpenter making wagons. According to his daughter, he was a talented artist and craftsman. He was a wheelright and built wooden wheels, which took much mathematical precision. Also according to his daughter, at one time Frank built Mack trucks out of timber before they were made of metal and aluminum. When the trucks went from wood to steel, he was out of a job and had to work odd jobs as a carpenter.

Below is the writing on the back of the above portrait. Can anyone translate this from Hungarian for me? 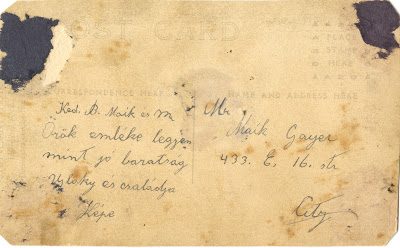