To the guardians of 100 Years in America: Happy 105th Anniversary!

They were married one-hundred-and-five years ago this week, on the day after Valentine's Day: February 15, 1905.  Regular readers will recognize the couple whose photo graces the banner of this blog. They are truly the stars of 100 Years in America.  Residing here online, their photograph welcomes you, the readers, and watches over the many family stories, photographs and genealogical details that I have shared. 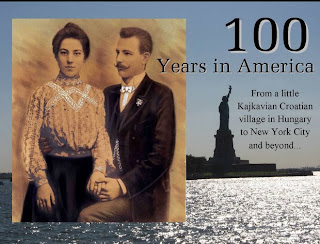 I have written much about this couple: my great-grandparents Ilona (Bence) and Ferencz Ujlaki. They were both born in the Međimurje region of Hungary, which is now Croatia.  Along with many other Hungarian citizens of their generation, they left Europe in search of a new life in America.  The stories of their journeys to the new country are the stuff of legends, yet those experiences were just a part of life for them.  Their childhoods in an ethnic Croatian village in Hungary and their beginnings in America as foreign immigrants formed them, and have become part of the fabric of our family, inspiring those of us who have come after them.

It is sometimes easy to forget that our ancestors were once young men and women with their lives ahead of them, sorting out who they would be and dreaming big dreams for their lives.  This photograph puts my great-grandparent's lives in perspective for me in that way.  I am told that it was taken shortly after they were married, and it is the closest thing our family has to a wedding photograph of the young 20-year-old bride Ilona and her new husband, 25-year-old Ferencz.

I was thrilled to be able to view microfilmed copies of the civil marriage registry from the town of Legrad where my great-grandparents were married.  Legrad is located today within northern Croatian on the Hungarian border.  At the time of Ferencz and Ilona's wedding, the village was part of Zala County, Hungary, so the civil records were written in the Hungarian language. 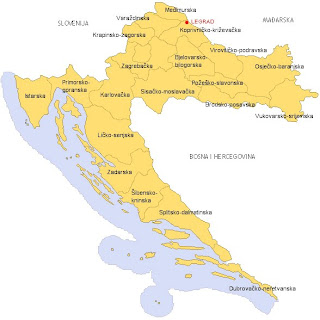 Ferencz and Ilona were both born and raised in this area - Ferencz in Donja Dubrava (formerly known as Alsó-Domború) and Legrad; Ilona in Legrad.  They began their life together as a married couple one-hundred-and-five years ago in Legrad's village church.  The Holy Trinity Catholic Church of Legrad (Župa Presvetog Trojstva), a beautiful late-Baroque one-nave parish church, was built around 1780. 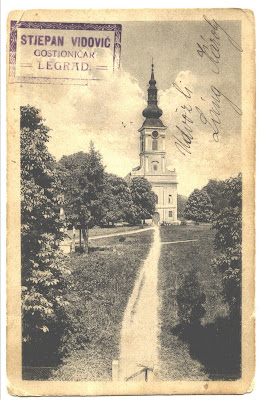 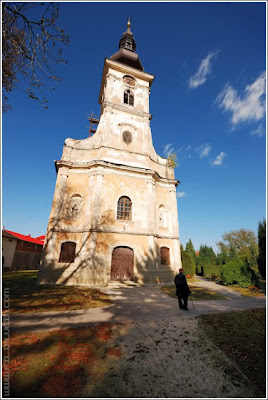 Legrad's Holy Trinity Catholic Church today
(Photo courtesy Filip Lucin)
You can see a small portion of the civil marriage registry listing the names of the bride and groom below.  See the top right on the image for Ujlaki Ferencz and Benczey Ilona (the Hungarian spelling of the bride's maiden name). Below the bride's maiden name is her married name Ujlaki Ferenczne. This means Mrs. Ferencz Ujlaki. (It is the name under which she is listed on the S. S. Carmania's ship manifest - and the reason that I had difficulty finding her listed at first.) On the marriage registry, also notice the seal of Legrad in the bottom right corner and the Hungarian crests in the background. 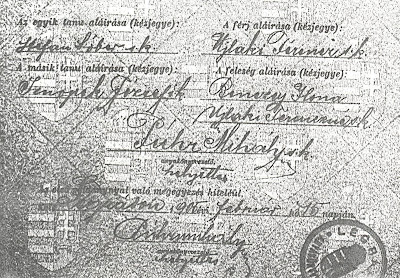 More than likely it was a cold winter day in Legrad when Ferencz and Ilona were married 105 years ago.  They were married for 34 years until his untimely death at age sixty.

A happy 105th wedding anniversary to my great-grandparents this Valentine's Day!  May the memories of their lives and marriage live on in the hearts of their descendants for another century.

This article has been submitted to the Valentine edition of footnoteMaven's Smile for the Camera carnival.  Visit her Shades of the Departed blog for more "valentine" photographs.
Sources:

Photograph of Legrad's Holy Trinity Catholic Church today courtesy of Filip Lucin.  Special thanks to Filip for the permission to use this great photograph and others in his collection.  Visit his Croatian language blog for more.

Map of Croatia thanks to www.legrad.blog.hr.