As we prepare to open the last year of this decade, it is natural to reminisce about where we were at its beginning: the year 2000. Much has changed for the world around us and for many of us individually, yet some things remain the same.

"From Y2K to where?" is the question that grips my mind.

I remember the soon to be unproven concerns that were in the news just prior to the new millennium, and I look now at the more tangible economic woes that many are facing.

I remember the days prior to the iPod, digital video recorders, cell phones with all the bells of whistles of today's models... I marvel at how I got along without my laptop and the speedy internet connection that I now take for granted.

So many other aspects of our lives have changed. What will the future hold? 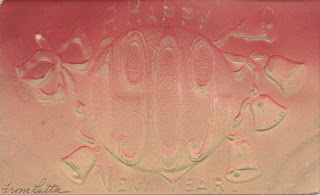 That was the question that our ancestors may have been asking themselves one-hundred years ago as they turned the corner on the last year in the opening decade of the 20th-century. 1909 was the end of a decade of tremendous change, a decade that was the heart of the Progressive Era (1890-1913). 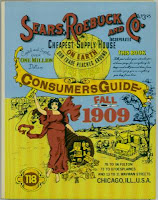 The decade was the first to see modern consumerism take off. In American homes, the Montgomery Ward and Sears catalogs were the second most popular books besides the Bible.

1900-1909 saw the advent of flight with the Wright brothers and welcomed Henry Ford's affordable Model T. Americans began adapting to the "aeroplane" and the automobile as a part of everyday life.

Newspapers saw the advent of sports pages and multi-frame cartoons. The publishing world introduced classics such as L. Frank Baum's The Wonderful World of Oz. It also created a stir with books like Upton Sinclair's The Jungle, Susan B. Anthony's History of Woman Suffrage, and Ida Tarbell's The History of the Standard Oil Company.

In the first decade of the 20th-century, America (and the world) was reinventing itself.

How was my family changing?

~
A year ago I asked myself the question, "Where was my family in 1908?" Composing the answer for each branch of my family was an enlightening exercise. Many of you took time to do the same. The result was a fascinating online "album": Snapshots of the world back in 1908.

I hope you'll join me as we welcome 2009 by taking some introspective time to look at some of your ancestors' lives during the first decade of the 20th-century. We know the world was changing quickly around them. Just how did their individual lives change from 1900-1909? Did they move or emigrate during this time period? How did their family grow or lose members? Did the occupation of the family breadwinner change? Did they have any other major changes in their lives during this very progressive decade one-hundred years ago?

I'll be posting a look at the changes in the lives of some of the members of various branches of my family. As you reminisce this new year about the last ten years of your life, I hope you'll join me in taking time to look back at your ancestor's lives one-hundred years ago.

Nipper the dog courtesy of Wikipedia.