On the hunt for Hungarians in Trenton, New Jersey 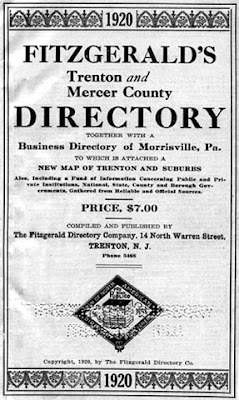 I am particularly interested in István & Maria (Németh) Tóth and their family who arrived in Trenton in the early 20th-century from Gelej and Mezőkeresztes, Hungary. I looked up their surname in the 1900 and 1920 directories. It seems that Toths didn't arrive until after 1900, but when they came they did so in large numbers. Thirty-three listings for Toths occur in the 1920 Trenton directory. Unfortunately, my family members had come after 1900 and had already moved on to Massachusetts by 1920 so they were not listed.

I found interesting reading in the historical society's 1929 history, including an overview of the Magyar population of the city at the time. A History of Trenton: 1679-1929 has a chapter entitled Trenton Citizens of Foreign Origin. It includes a section on Hungarians, stating the following statistics on the number of Magyars in Trenton:

It looks like my family was one of the more nomadic Hungarian immigrant families. They arrived in Trenton when most other Hungarian families did, and left a few short years afterward.

The rest of the 1929 history includes a description of the character of the Hungarian people and the Hungarian neighborhood of the city.

According to the Trenton Historical Society authors in 1929, "The Hungarian makes a valuable workman and is quiet, thrifty, industrious, home-loving and sturdy. By nature he is sociable and finds company necessary in his scheme of life. This accounts for the courtesy and politeness of the people."

I hope these glowing words applied to all of my family members!

It was helpful for me to read the overview of the Hungarian neighborhood in Trenton circa 1929. According to the book, "In Trenton the Hungarians occupy more than thirty-five different streets in whole or in part. All that section of Trenton lying south of Bridge Street, extending many blocks east and west, all the way down to what was formerly Wharton Street, now merged in South Clinton Avenue, is populated by Hungarians".

Now to find the home of István & Maria (Németh) Tóth, and the final resting place of their little Lajos...

Interested in getting a peek back at Trenton, New Jersey one-hundred years ago? View these local WZBN-TV videos for a look back (though not great video-quality, they provide a little bit of interesting history): Trenton Makes, The World Takes and Trenton 100 Years Ago.
Written by Lisa / Smallest Leaf