"When we seemed to walk in freedom as in the sun..."

The Fourth of July, the celebration of our nation's birthday, never quite lives up to its ideal for me. Full of sun and fun, parades and flags though it may be, somehow I usually find myself wondering on this day what it was like for Americans in generations before me to celebrate the birth of America and wishing that I could make a visit back into their times.

I love this family photograph in my collection that takes me back half a century ago. It includes several of my family members, including the little flag-bearer. 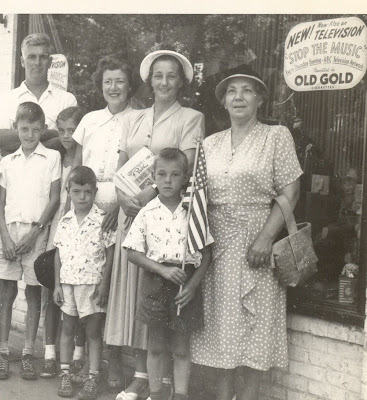 Just above and to the left of my great-grandmother's shoulder is posted an ad that helps to date the picture. It reads:

You may have seen reruns of those famous commercials with the "dancing cigarette packs" from so many years ago. Those were Old Gold brand. (A decade or so after these began to run, cigarette advertisements were banned from television entirely.) Stop the Music ran at the very beginning of the 1950s during a time when America (and American television) was very different than it is today.

Only five years had passed since the end of World War II. It was a joyful time for the country and the world. The Great Depression and the war were both in the past, and there was hope for the future.

I enjoy looking back at this moment in time as it is preserved in this treasure of a family photograph. The ladies in their fine hats, the children so serious and proud... I wonder: where had the group just come from and where were they going? Why the little flag-bearer? Was it the Fourth of July, 1950?

In honor of today's celebration of the birth of our country, I'd like to share a poem that speaks to me of the joy of the nation as it celebrated the end of the war back in 1945. Written by Phyllis McGinley, an American poet active during the 1930s, 1940s and 1950s, it speaks of the patriotism felt by a people reveling in the successful preservation of freedom. Those of us tempted to take for granted our nation's peace and prosperity today would do well to remember how Americans "savored the hour" in 1945 when they realized that they were assured of freedom once more.

Savor the hour as it comes. Preserve it in amber.

Instruct the mind to cherish its sound and its shape.

The horns and the ticker tape.

The flags, the parades, the radio talking and talking,

Ceaselessly crying the tale on the noisy air

(But omitting for once the commercials), the sirens shrieking,

The bulletins in Times Square,

The women kneeling in churches, the people's laughter,

The speeches, the rumors, the tumult loud in the street.

Remember it shrewdly so you can say hereafter,

"That moment was safe, sound and sweet.

Safe was the day and the world was safe for living,

For Democracy, Liberty, all of the coin-bright names.

Were not the bomb bays empty, the tanks unmoving,

The cities no more in flames?

That was an island in time, secure and candid,

When we seemed to walk in freedom as in the sun,

With a promise kept, with the dangers of battle ended,

And the fearful perils of peace not yet begun."

For more images of "celebrations of home", see footnoteMaven's 3rd edition of I Smile for the Camera.
Written by Lisa / Smallest Leaf

Email ThisBlogThis!Share to TwitterShare to FacebookShare to Pinterest
Labels: Family photos, Holidays, I Smile for the Camera Carnival