Kifli by any other name 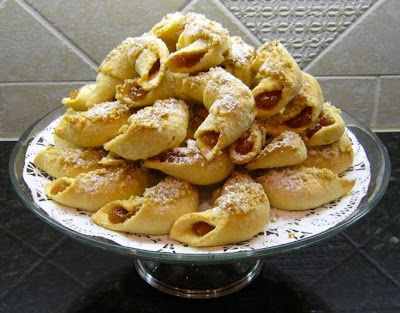 One of the most enjoyable holiday treats in my childhood memory (counting all the holidays) was one of my grandmother's specialties. Everyone in our family calls them "Gramma's Christmas Cakes". When I was a child and the Christmas season rolled around we could always be sure that these delicious treats would make an appearance. Sometimes we would hear in advance that Gramma was working on them. (Later in life I learned how labor intensive they were.) Other times we would be surprised by the sudden appearance of a pretty doily-decorated plate loaded with the apricot jelly-filled crescent-shaped goodies. Every now and then Gramma's beloved Christmas Cakes would make an appearance at Easter, to the great delight of those who enjoyed them the most.

Inspired to carry on the tradition of baking these holiday goodies, I invited Gramma over to my home one day to have her teach me how to do it. I learned that day just what a labor of love Gramma had performed for her family for so many years. With my own small children causing distractions underfoot throughout the whole process, I gained a new appreciation for my dear grandmother and her patience and dedication to Christmas Cakes and her role as grandmother and great-grandmother.

Gramma had learned to make Christmas Cakes by watching her mother-in-law, who had immigrated to America from northeastern Hungary. Because of this I assumed that the recipe was probably something from that region. It was only a few short years ago that I learned, thanks to a letter from a family member of my grandmother's generation, the true identity of these goodies. Like so many of our ancestors who emigrated from their home countries and found it more convenient to Americanize their names, the Christmas Cakes had done the same. Their Hungarian name was Kifli. I was thrilled to learn this and also to find that recipes for them were found in many Hungarian cookbooks and orders could be placed for them with Hungarian bakeries even in the U.S.

Of course, nothing can replace the taste of Gramma's own version of kifli. With the understanding that written directions can never replace watching and learning from an expert like Gramma, here is my version of Gramma's recipe for those of you that are interested in giving them a try:

Put them in a pot with enough water to cover them plus about 1 inch more
Cook for about 45 minutes until soft, stirring frequently
Mash the apricots
Add sugar
Cook about 1 1/2 to 2 hours until very thick (the longer the better), stirring frequently
Sprinkle the jelly with cinnamon

Mix flour with butter and then salt and sugar
Make a well in the middle - add egg yolks, vanilla and sour cream gradually
Mix and kneed until smooth (keep working the dough until ready)
Use flour to make it not too sticky (can freeze - wrap in freezer paper and cover with flour)
Roll out dough
Cut the dough into 4 pieces
Chop walnuts and whip egg whites
Roll out one of the 4 pieces of dough
Cut into individual 3 1/2 x 3 1/2 squares and fill with a heaping teaspoon of homemade apricot jelly
Roll each into a horn (crescent)
Top each with egg whites and nuts
Bake in the oven at 350 degrees until light brown (about 30-35 minutes)

I am always happy to hear that family members are baking a batch of Christmas Cakes and continuing to keep them in the family for the future generations to enjoy and remember.

We join with generations of Hungarian families that have made and enjoyed these goodies. In fact, the origin of kifli may go back to the 17th century. According to The Urban Fakanál by Andrea Miklós on The New Hungarian Voice webpage, legend has it that Budapest was threated by Ottoman Turks at the end of the 1600's. Supposedly the Turks intended to capture the city by building tunnels under the city wall. Hungarian bakers, who worked the early shift, caught the Turks in action and the attempt failed. To remember their success, the city's bakers baked bread in the shape of the Turkish Empire's emblem: the crescent. Kifli immediately became popular in Budapest and Vienna. In the 18th century, Marie Antoinette may have brought kifli back to Paris, inspiring the French to make their own version: the famous French croissant.

If you're pressed for time or not brave enough to try making your own kifli, here are a few bakeries in the U.S. that offer them for purchase:

Or buy just the apricot preserves and bake the kifli yourself:

The topic for this post was inspired by Thomas MacEntee's Advent Calendar of Christmas Memories at Destination: Austin Family. Check out his calendar daily this month for some good mini-memoirs of this nostalgic season. This post will be listed under Christmas Cookies on December 8.
Written by Lisa / Smallest Leaf