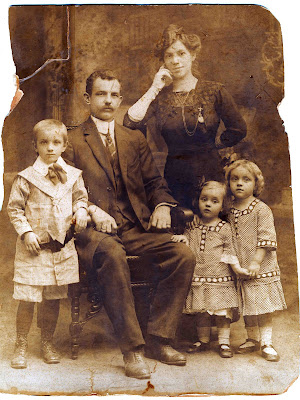 This beautiful family photo (although a little raggedy at the edges and in need of repair) is one of my favorite portraits of Frank & Helen Ujlaky and their young family. (Click on the portrait to view it up close.) More than likely it was taken in early 1913, before Helen was visibly expecting her fourth child. Pictured are Frankie (about age 7), his parents Frank & Helen (formerly Ferencz & Ilona), and his younger sisters.

Helen and young Frankie had only been in the United States for about four years, but look how the family had changed!

With the exception of one, all of Helen's children were born at home. (She had seven children including a baby who was stillborn in 1918.) The exception was her last child, who was born in a hospital on Staten Island. According to one of her daughters, after having all of her other babies at home, it was quite a shock to her mother to birth her last baby in the hospital. She much preferred the way of birth at home.

Frank & Helen's oldest child Frankie was born in Legrad, Croatia (which was Hungary at the time). Their daughters were born in New York City at the couple's home in Manhattan.

One of the things that strikes me about the image of the Ujlaky family above is the way that the sisters are interacting. The eldest is holding her little sister's hand, being a little mother to her. After Frankie, and until the birth of their baby brother, this family filled with little girls.

According to one of the sisters, she and her sisters shared a bed when they were little girls. Together they learned embroidery from the nuns. When they got old enough, they used to help each other curl their hair using an iron rod heated in the fireplace. (Sounds dangerous to me!)

The closeness of these sisters that began in their childhood has continued throughout their lives, although they lost their belovedyoungest sister Ethel at the age of 22.

It is beautiful to see a portrait like this of the young Ujlaky family: new to family life and new to America. What a long way they have come.
Written by Lisa / Smallest Leaf