This image of the new Mrs. & Mrs. Ferencz Ujlaki was supposedly taken about a month after their marriage. He was just shy of 26 years and she was not yet 21. 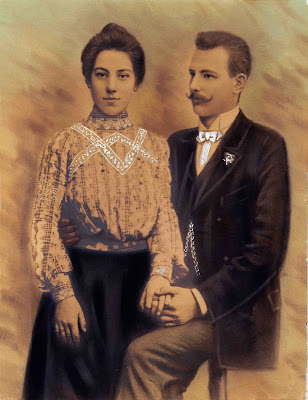 They were wed in the Catholic Church of Legrad, Hungary (now Croatia) on February 15, 1905. The church is pictured below in a postcard image that was in Grammy Ulaky's possession. 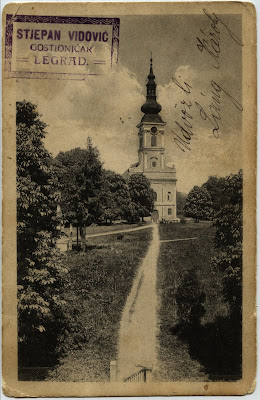 More later on this church (and a few more photos coming)...

I was happy to find the actual civil marriage registry record from the town of Legrad thanks to the LDS church members who microfilmed the records and provide access to them via local family history centers.

I have yet to finish translating the entire document, but will post the information when I do. Ferencz & Ilona's marriage record has provided some interesting information so far, even though I still have not been able to read the whole thing.

More information coming later, as I decipher this wonderful record of our family's history: the record of a marriage union that has produced so many descendants in just 100 years.