In the old country 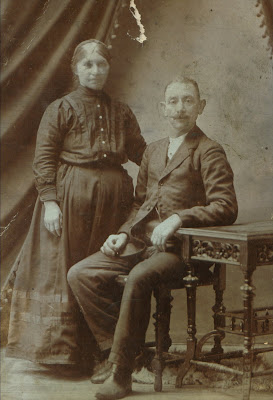 Ilona Bence was born to Stjepan & Magdalena Bence and raised in Legrad, which is now in the Međimurje district of northwestern Croatia. Here are Stjepan & Magdalena in a portrait, probably taken in the early twentieth-century. (Anyone out there able to help me with a more specific guess, based on clothing styles, etc.?)
Stjepan was born in 1857 and Magdalena (born Magdalena Bedenices) in 1860. He was a farmer, or foldmuves, as daughter Ilona's 1905 Hungarian civil marriage registry indicates. Ilona shared with her children many years later in America that she was not able to play with friends on Sunday because the family went to church in the morning and then she was required to take the oxen into the fields in the afternoon. She often struggled with the oxen.
Living near Legrad, the family was right by the Drava (or Drave) River (and near its confluence with the Mura River also). They often had to cross the river by raft to tend to their crops and possibly their livestock. It may sometimes have been a difficult task to cross the river. 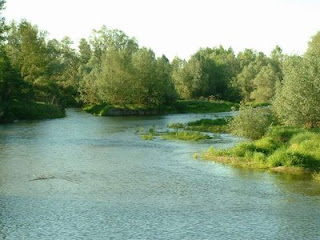 As Ilona told her daughter Wilma later, the Bence family owned much property and livestock. They produced eggs and milk, and harvested grapes and other things. Their land ownership was taken away when political upheaval began and the family was reduced to working their own land without being able to provide for their own needs. Hard life, but what a beautiful place to live!
Written by Lisa / Smallest Leaf