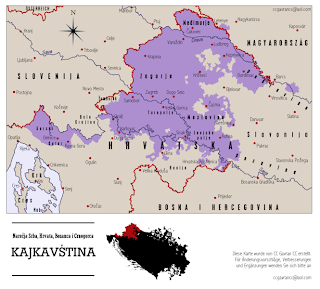 Well, not that I ever would have gotten around to it, but I've often wished that I could learn to speak Croatian, the original language of my ancestors - or so I thought. Croatian language courses are fairly easy to come by, and the language looked pretty simple (pronunciation-wise, anyway).
Now I learn that the dialect that my ancestors spoke was actually Kajkavian, a dialect of Croatian that is a transition language between today's standard Croatian and Slovenian. (Makes sense, because Slovenia is the area's neighbor to the west.)
Supposedly it used to be easy for natives of this area of Croatia (including those from the capital, Zagreb) to tell non-native speakers because they did not use Kajkavian instead of Croatian. Much immigration has lessened that now, but to think I might have spent time learning Croatian, thinking that I could fit in with the natives and then sounding to them, well, you know... I guess I'll always be an outsider in my great-grandparents' native land. Sad, but true.
But if only I could find myself a Kajkavian language course...
Bumo vidli! That means "We'll see!" (in Kajkavian, of course...)
Written by Lisa / Smallest Leaf