The view from my corner of the world

I'm an American. I fly my American flag with pride. But in many ways I consider myself a citizen of the world.

On St. Patrick's Day the flag of Ireland is also waved proudly as you might have noticed if you visited Small-leaved Shamrock and A light that shines again.

The Hungarian and Croatian flags have a special place in my heart, too, as you may have guessed from reading 100 Years in America.

There are other countries that are also dear to me. I have a collection of international flags and dolls from all over the world (as I mentioned in my profile). My family and I have traveled overseas, and my children and I have visited many more places by proxy through the multi-continental business trips of my husband and the stories and items he has brought home on his return.

One of the countries that is most beloved to me in addition to my own is Switzerland, my home for part of my early childhood. My family moved to Switzerland at a time in my life when I was first able to be impacted by the foreign culture and language around me. I was just the right age to begin to compare the two worlds as I experienced the new one. I remember the beautiful late nights of Swiss summers, lying on the floor after a winter fondue, the enticing smells of the Zopf at the Migros, trips around town on the tram (take a ride via video below), elephant rides at the local zoo, and more.


Some of my most memorable experiences were during my time spent attending Swiss Kindergarten. Besides conversations with my good friend, an English-speaking girl whose family was British, my communication in school was conducted primarily in Schweizerdeutsch. I was just the right age to be a little language sponge and I learned fast. Soon I was teaching my parents new vocabulary at home.

During our stay in Switzerland, we were joined by what would eventually be considered a true member of the family: our red Volvo. The car carried our little family throughout Europe on many weekend trips and (thanks to my Dad's skillful driving) survived many a drive up steep, curving mountain roads sans guardrails.

When our family moved back to the United States, the Volvo returned with us via the Queen Elizabeth 2. The car remained a part of the family for many years. For this little daydreaming girl with fond memories of other homes and places, it acted as a constant in a changing world: a vehicle making the daily rounds in our new neighborhood, but keeping close the memories of our time in a "previous life". 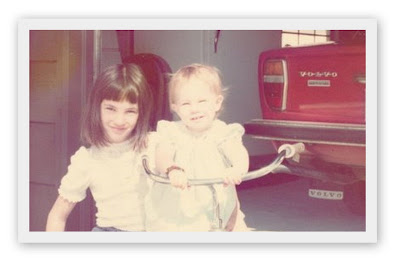 The Volvo remained healthy long enough to be the very car in which I learned to drive as a teenager. Like a beloved pet, however, its days unfortunately had to come to an inevitable end. But its place in my heart has yet to be equaled by another vehicle and the memories that it evokes of my childhood remain.

Now, as an adult, I am aware of how my childhood formation in two different countries has shaped me. My results to the What American accent do you have? quiz were no surprise. The product of homes in several different geographical locations, I apparently have "no accent".

A few years ago I was struck by something that I read in Adam Gopnik's Paris to the Moon, a book about he and his fellow New Yorker wife's move to France with their young son:

It is, perhaps, a truth of expatriate children that rather than grow up with two civilizations, they grow up with less than one, unable somehow to plug in the civilization at home with the big one around. They grow up, we have noticed with other kids, achingly polite, and watchful and skilled, "adult," and guarded.

Me in a nutshell.

It seems that my experience of being a non-native speaker in a world of Swiss kindergartners has stayed with me. I am usually cautious with my words and often wondering about how the person at the other end of the conversation may be receiving them.

Growing up I sometimes felt different than most of my childhood peers in American classrooms who had never traveled out of "their own world". On the other hand, it was clear to me that I was certainly far from being Swiss. I had received the gift of living in the midst of both cultures, and they were a part of me, yet I didn't feel that I fit perfectly into either one.

The experience of living in the midst of a new language and culture during such a formative time of my life is one of the reasons that I value the study of our world and its many fascinating geographical regions, cultures, languages and histories, including that of my own family history.

I have tried to give my children this same appreciation and I am thankful that they seem to value the world and its variations as much as I do.

One of my children has qualified for the third time this year to compete at the state level of the National Geographic Bee. I am proud of her accomplishments and happy to see all of my children sharing my love for other cultures and peoples of the world.

The Hungarian-Croatian branch of my family that I have written about here at 100 Years in America has been in the United States for more than a century.

Personally, I've spent most of my life here.

Yet I have always lived with the knowledge that there is a great big world out there, and though it may sometimes seem so, America is not necessarily the center of it.

To all my friends and readers throughout the world: "Hello!" and "Grüezi!" to you from my corner of the earth to yours.

Email ThisBlogThis!Share to TwitterShare to FacebookShare to Pinterest
Labels: About the author, Carnival of Genealogy, Croatia, Hungary, Ireland, Languages, Switzerland