1911: Appliances to bring "peace of soul and domestic independence"

I was mulling around in old editions of The New York Times at the New York Public Library a few years ago when I came across this gem. I can't help but share it in honor of all those of us that take our kitchen appliances for granted. 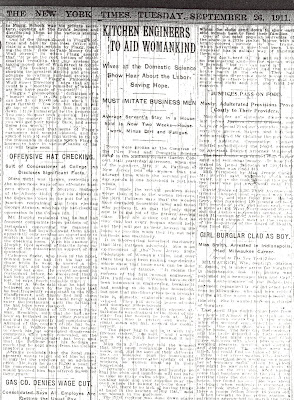 KITCHEN ENGINEERS TO AID WOMANKIND
Wives at the Domestic Science Show Hear About the Labor-Saving Hope.
MUST IMITATE BUSINESS MEN
Average Servant's Stay in a Household is Now Two Weeks - Housework Minus Dirt and Fatigue.
"...It is labor-saving household machinery that Mrs. Pattison advocates. She is an ex-President of the New Jersey State Federation of Women's Clubs, and over there they have been making experiments which show that housework can be done without dirt and fatigue. 'It means the success of the first women engineers,' Mrs. Pattison said. 'Women have never been interested in engineering, because it had nothing to do with the household, but now that machinery has been brought into it, domestic engineers must be developed. They will develop peace of soul and domestic independence.'
"A big fireless cooker with electric attachments was dragged to the front of the stage for the women to look at. Mrs. Pattison, who is pretty and wore a smart gown and hat, showed the cooker herself.
"...Miss Sara J. Lovejoy told the women that they must reorganize their households, and just as men in their different lines of business plan by convenient methods to conserve the energy of the workers, so women must do in their households.
"Arrange your kitchen and laundry so that the cook and laundress will not have to take so many extra steps. Have your cooking table and your supplies near the oven where the baking is to be done."
~
In spite of the progressive nature of many of the women of New York at the time my great-grandparents were first settling their families there, it would be many years before modern inventions and ways crept into their households. I doubt that any of them could afford these new technologies, not to mention a household servant: cook, laundress, or other.

However, the world around them was truly changing quickly. They must never have imagined what the lives of their descendants would be like - even from the standpoint of kitchen life!

This article has been contributed to the "I read it in the news!" edition of the Carnival of Genealogy hosted by Jasia of Creative Gene.
Written by Lisa / Smallest Leaf