If only this photograph had musical accompaniment 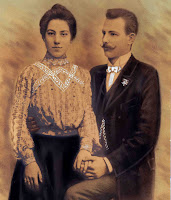 My great-grandmother Ilona (Bence) Ujlaki lived to the age of 97. Her memory remains warmly tended in the minds of many generations of family members who came after her and had the chance to be a part of her life.

I treasure Ilona's photographs because they are a glimpse into the young life of a great-grandmother that I only knew in her nineties.

I treasure Ferencz' photographs just as much, but for a different reason: I never had the chance to meet him. He was such an important part of our family, yet most of my family members living today never knew him. It was his decision to immigrate to America that set the course for his family's life here. It was his tireless work to support his family that kept them out of poverty and started them off on a successful life in the new world. In many ways we, his living descendants, are the beneficiaries of the sacrifices that he made throughout his life. We are the recipients of a "good life" that Ferencz really never had a chance to live.

I am blessed to have photos of my great-grandfather. One of my favorite photos, perhaps the oldest one of him in my collection, is this photo of Ferencz with his dance troupe in the Croatian region of Hungary. He is the one circled in the center of the photo. 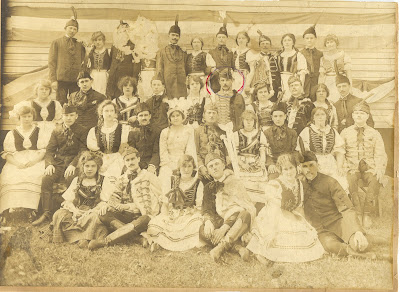 This is the only photo that I have of any of my family members in traditional Croatian or Hungarian dress. It is a beautiful window into the lively culture that was a part of the lives of my ancestors, and which unfortunately modern generations have now lost. What fun it must have been to be a part of the lively celebrations at which these dancers performed. I can imagine the people, the food, the wonderful festivities... I just wish I could have heard the music and seen my great-grandfather dancing!

For more on the traditional dance of Croatia, see the LADO website. Lado is an archaic Slavic word, a synonym for words meaning good, lovable, and dear, which was frequently used as a refrain in old ceremonial songs of north-western Croatia. It is also the name of the Folk Dance Ensemble of Croatia. LADO (the ensemble) was founded in 1949 in Zagreb. Its objective is to research, collect, artistically interpret and present on stage the most beautiful examples of the rich traditions of Croatian music and dance. This New York Times article about their performances gives a great introduction to their show.

For more on the traditional folk dancing, music and culture of Croatia, you might be interested in visiting the website of the Ethnographic Museum of Zagreb (Etnografski muzej Zagreb) or Darko Zubrinic's webpage on the music of Croatia.

I have shared this "favorite photo" of my great-grandfather as part of the 4th edition of the "I Smile for the Camera" carnival. For the favorite photos of other family historians, visit footnoteMaven's Shades of the Departed.

Email ThisBlogThis!Share to TwitterShare to FacebookShare to Pinterest
Labels: Family photos, Ferencz Ujlaki (1), I Smile for the Camera Carnival