Though not an official Graveyard Rabbit, my heart is certainly with this group of cemetery dwellers. I can't seem to drive by a cemetery without having to force my steering wheel to keep the wheels straight on the road and not turn in. I often wonder about the life stories of those resting below the ground. Particularly old cemeteries and those with special character really draw my attention.

For this reason, and also because I enjoy a beautiful cultural landmark, I found one short episode of The City Concealed especially appealing. A series of online videos "exploring the unseen corners" of New York City are being produced by WNET New York. Just shy of seven minutes, their video on the Tombs & Catacombs of Green-Wood Cemetery is a must-see for any lover of New York history, not to mention anyone who might have a little bit of Graveyard Rabbit in them.

Established in 1838, the cemetery was long a tourist destination with its beautiful gardens and stately tombs. Although the public lost access in the 1970s, they are now being invited back in for tours, concerts and even film screenings. Burials in the cemetery number up to 560,000 and include famous names such as Boss Tweed and Leonard Bernstein.

Thanks to John Warren's New York History blog for mentioning this video.

This article was written for the 1st edition of the Graveyard Rabbits Carnival whose theme is "Exceptional Finds". 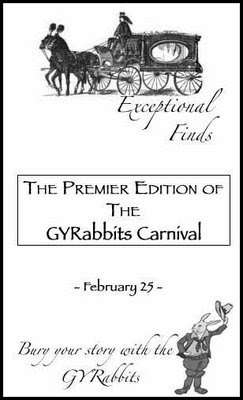