On the eve of Szent Mikulás 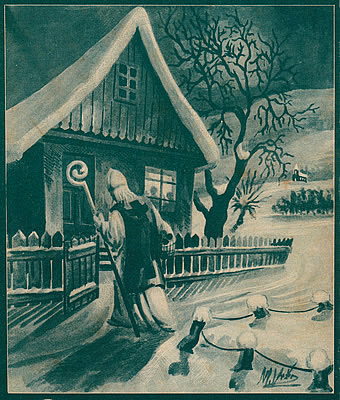 On the eve of Saint Nicholas, December 5, Croatian and Hungarian children's homes fill with excitement. Shoes and boots are polished, then placed out in hopes that they will be kindly filled by Sveti Nikola (as he's called in Croatian) or Szent Mikulás (his name in Hungarian).

He may come with a record book recording the children's deeds or an angel who helps distribute presents, but he is always accompanied by the mischief-making Krampus, who leaves twigs for children who "deserve" them.

If Szent Mikulás filled your shoes this year, would you receive candies, fruit, nuts and chocolate other small goodies, or would you find potatoes, stones, switches, or wooden spoons in honor of your misdeeds? If you're like many Hungarian children, you might find a little bit of both.

And if you're reading this on December 5, don't forget to polish your shoes and put them out!

Image courtesy of the St. Nicholas Center collection. It is the cover illustration of Obitelj, 1933.

The topic for this post was inspired by Thomas MacEntee's Advent Calendar of Christmas Memories at Destination: Austin Family. Check out his calendar daily this month for some good mini-memoirs of this nostalgic season. This post will be listed under Santa Claus on December 6.
Written by Lisa / Smallest Leaf